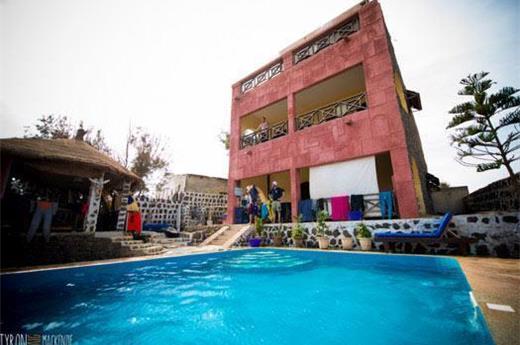 Surfing in Senegal is an adventure. This western-owned and managed surf camp is located on the tiny island of NGor, Africa’s westernmost point just off the coast of Dakar, Senegal. They offer surf guiding and lessons.

If someone offered you this tomorrow:  4 hour flight, no time zone change, exotic place, warm welcome, clear water and sun in the middle of winter….would you hesitate?

Discover Senegal and its surf amazing spots at the tip of the Almadies:  N’got, Ouakam, le Vivier are all within a boatride each morning.  Return to the fishing village, to the sound of the drums and to a carefree Senegalese smile…

And for the less adventurous, the Casamance, which is a region of southern Senegal, warm water and great beachbreaks galore.

Senegal doesn’t boast the most magnificient scenery in Africa but it does boast some of the most unforgettable sights that will offer you a complete change of scenery.  It has everything from natural parks, full of all kids of birdlife and animals as well as lovely beaches lined with diverse lush vegetation that will entice any traveller.

Colonialism has left Senegal with undeniable traces of the French language and culture but speaking the same language doesn’t mean the country is similar.  The country has been independant for 50 years.  Visiting Senegal is an adventure so adopting the extraordinary Senegalese sense of humour, one of self-mockery and mischeif will get you far.

The best time to surf in Senegal is from mid October until mid June.

From November until May the pleasant climate is subtropical, dry, warm and sunny but there’s often a cool breeze at night.  The air temperature varies between 24 and 28°C in the daytime and the ocean between 16 and 24°C.

The  N/NE ‘Harmatan’ wind blows during the day on spots around Dakar.  In the springtime, it blows more from the N/W.  During the wet season the south winds sometimes blow.

The tides range about 2 metres and affect certain spots.  Not many people in the water – watch out for sea urchins when getting in and out of th water.  From November to February, bring a 3/2mm springsuit becaues the water can drop to 17°C.  From April to June, a springsuit will be useful.

From June to October, during the wet season, the sun is very strong and the air is very humid.  Temperatures rise to 32°C by the sea and 40°C inland.  The water temperature beats records at 29 - 30°C,  Bring a sweater and trousers for the evenings for the mosquitos that are out at this time of the year.

Reef breaks, Point breaks, Beach breaks everything in place to make Senegal an unforgettable surf vacation destination.  Whether you are a good surfer or a beginner, you can find great waves here all year round.

Senegal and especially the Almadies penisular in  Dakar is a swell magnet bringing in swells from N/NW low pressure systems that form in the North Atlantic Ocean.

Waves can be powerful and big winter swells bring in waves of up to 3.5m.  From August until October swells from the S/SW are generated by storms that form off the African coast.

Most of the spots are focused in an area around the tip of the Almadies – there’s a nice atmosphere and you’ll love this colourful place.

In the south of the country, in Casamance, great beackbreaks can be found stretching along kilometres of beach, It’s uncrowded and the water is warm.

Yoff: Some nice beachbreaks where you can see planes coming in to land just above you.

Le Virage: A series of little coves with easy to surf rights and lefts with no one around, move from one to the other as the tides move in and out

N'Gor: A lively little fisherman’s beach – take a little boat trip by local canoe, in 5 minutes you will arrive on the island opposite the Madrague Hotel.

To the left of the island, you can paddle or take a canoe to the magic right-hander from the ‘Endless Summer’ movie.

To the right of the island, a left breaks into clear water by the side of the rocks.  Clear water and a relaxed atmosphere in the water.

Pointe des Almadies: At the tip of Africa, facing full west, a series of spots that work well and frequently – the bay of Carp est on the little island just off the coast.

Club Med: In front of the Club Med resort.  Short but punchy lefts and rights

Secrets – Vivier:  Left and right peaks that break nicely.  Watch out for the tonnes of urchins that wait for you to wipeout!

Les Mamelles: Opposite the hill with the same name.  Under the lighthouse of Cape Verde – Difficult takeoff!

Ouakam:  On the other side of Mamelles, towards the south – a well reputed spot.  It only breaks about 30 times a year but is powerful. The takeoff is hollow and it a great barrel.

Corniche Ouest: Further down south there are many quality spots that are best explored by boat – this area is sometimes polluted because it’s located near the city of Dakar.