“I’m going to Indo.” There is perhaps no sentence for a surfer that comes laden with so much hope, expectation, adrenaline and, to use a surfing term, froth. As the world’s largest archipelago with over 18,000 islands the sheer quantity and quality of waves is unrivaled. The Indian Ocean delivers consistent swell all year round to the coral reefs which bend the groomed lines into perfect waves. Offshore tradewinds further airbrush the magic, while the tropical sun and bath-like water add sweet heat to this surfer’s dreamscape. The warmth of the Indonesian people, the beauty of its culture and the incredible food add more depth to the surfing experience. 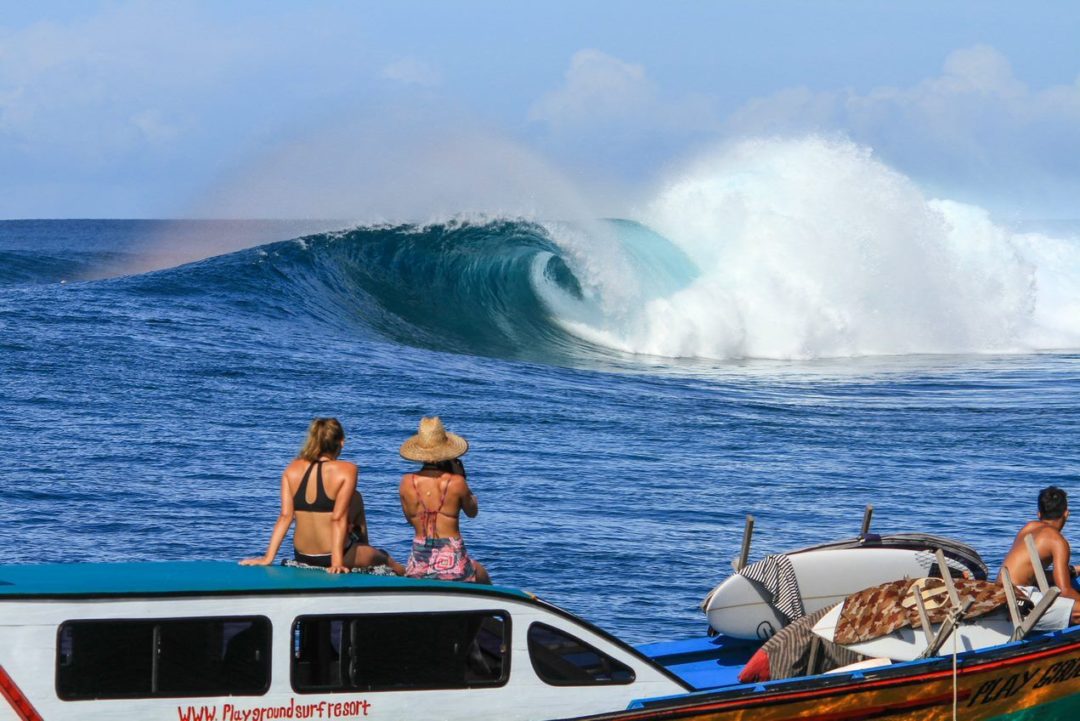 Since the discovery of waves by hard core explorers in the 1990s the Mentawai Island chain has revolutionised surf travel. The 70 or so islands off the west coast of Sumatra pack more perfect waves per square mile than any other surf destination. The dry season is the best bet for the bigger swells, but increasingly the off season offers cheaper trips, less crowds and more options for the learner and intermediate surfers. 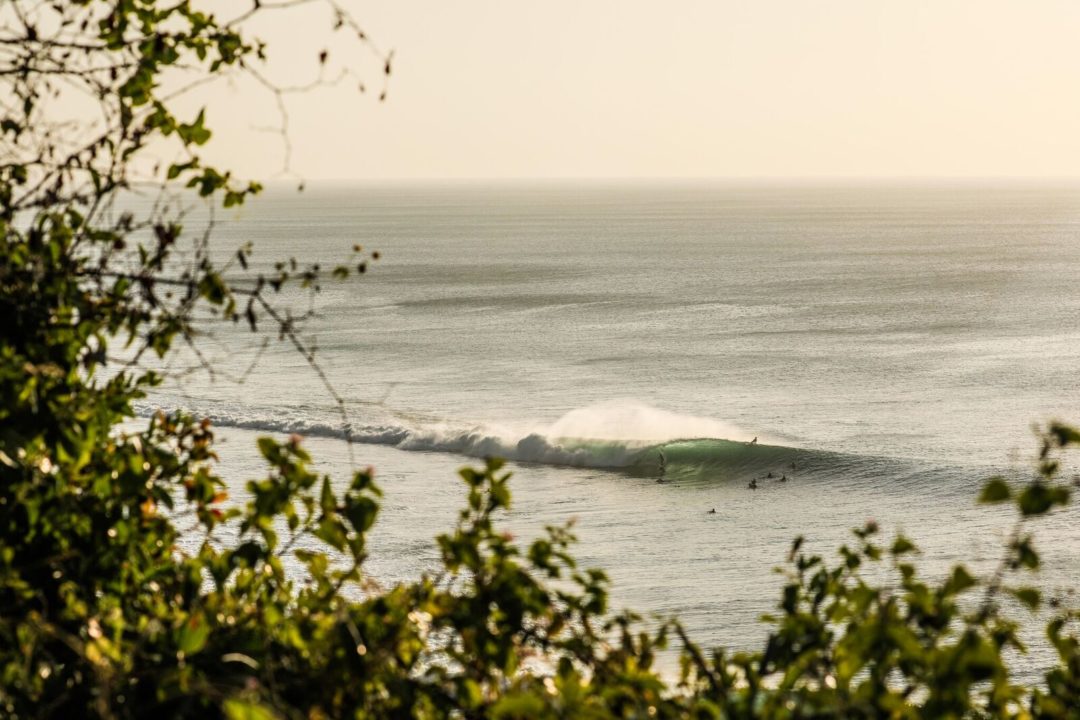 From the dreamy lefts of the Bukit Peninsula, to the beachies of Canggu and the more recent discoveries on the East Coast, Bali offers year-round consistency and variety for every type of surfer. 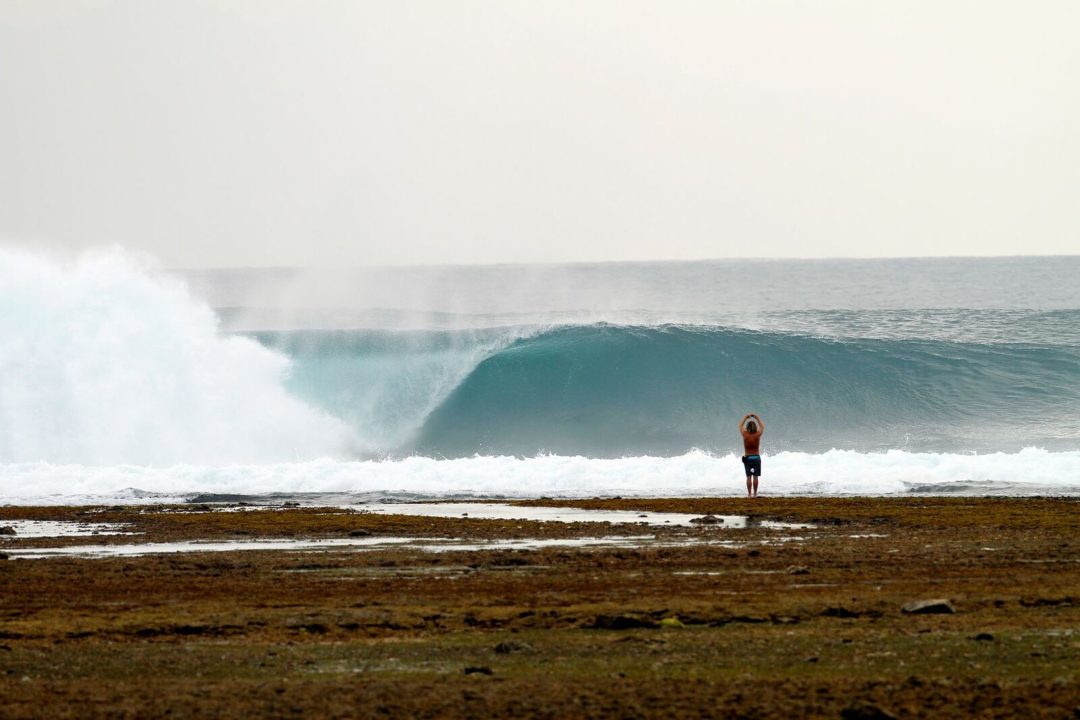 Just a two-hour speedboat ride from Bali, G-land offers a pure surfing experience where life is based on the rhythms of the waves, tides… and the daily sunset beers.  Elsewhere in Java at the opposite western tip on Panaitan Island lies a series of hollow, powerful rights and, in One Palm, one of the most perfect left point breaks in the world. 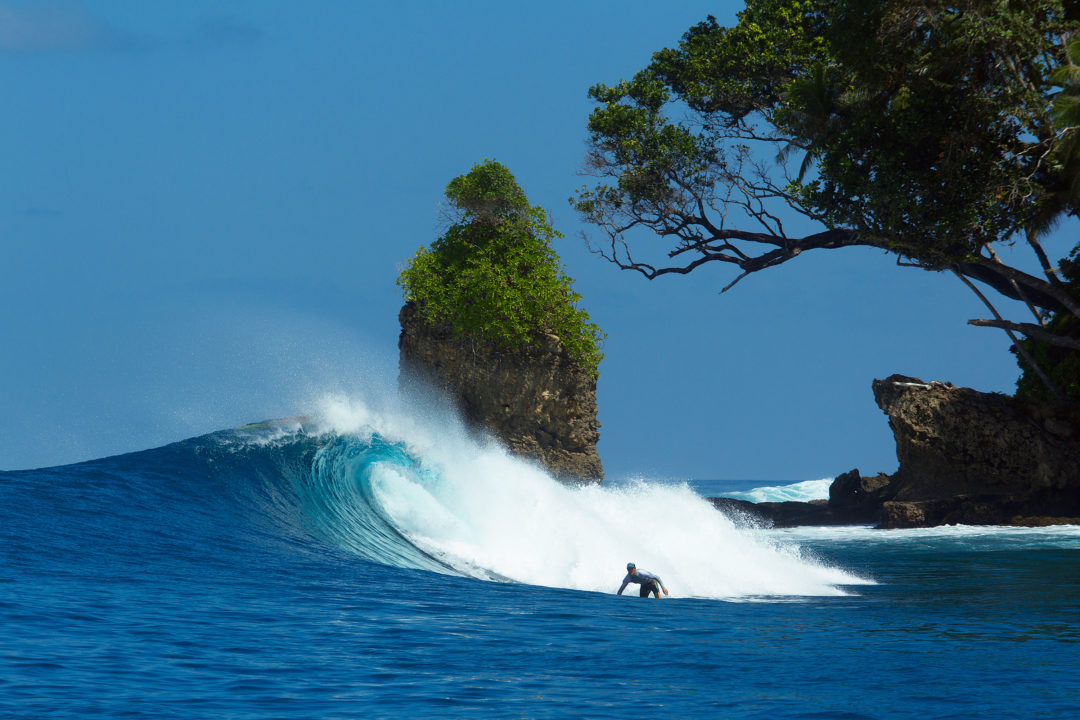 The Telos or Batu Islands are group of spectacularly beautiful islands, that although receive less swell than the Mentawai, provide consistent, uncrowded and fun waves to suit all standards. 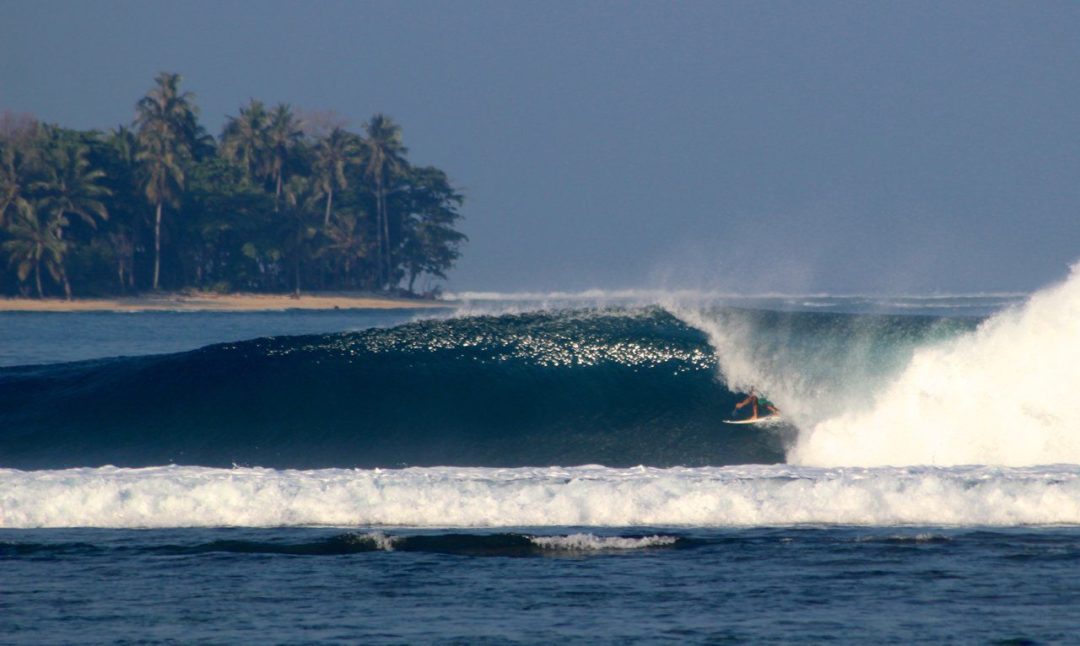 Volcanoes, rainforests and beautiful coral reefs, Sumatra has something for every kind of adventure seeker, especially a surfer. The waves on the outer islands are well known, but on the mainland there are a number of quality reefbreaks and one world-class beachbreak within a short distance of the town of Krui. 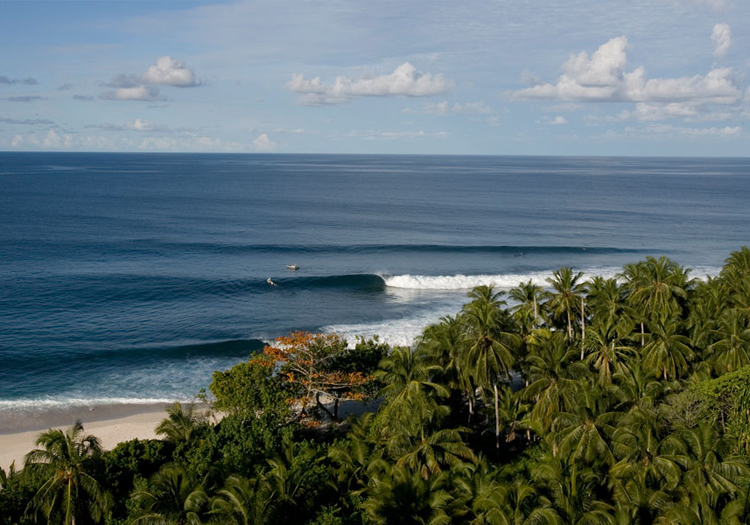 Surfing West Papua means being surrounded by jungle, small tropical ancient limestone islands, pristine waters and lots of little bays that catch all types of swell. This is a real adventure where the rich marine life and curiosity of the remote villagers is almost as big a drawcard as the uncrowded, empty waves. 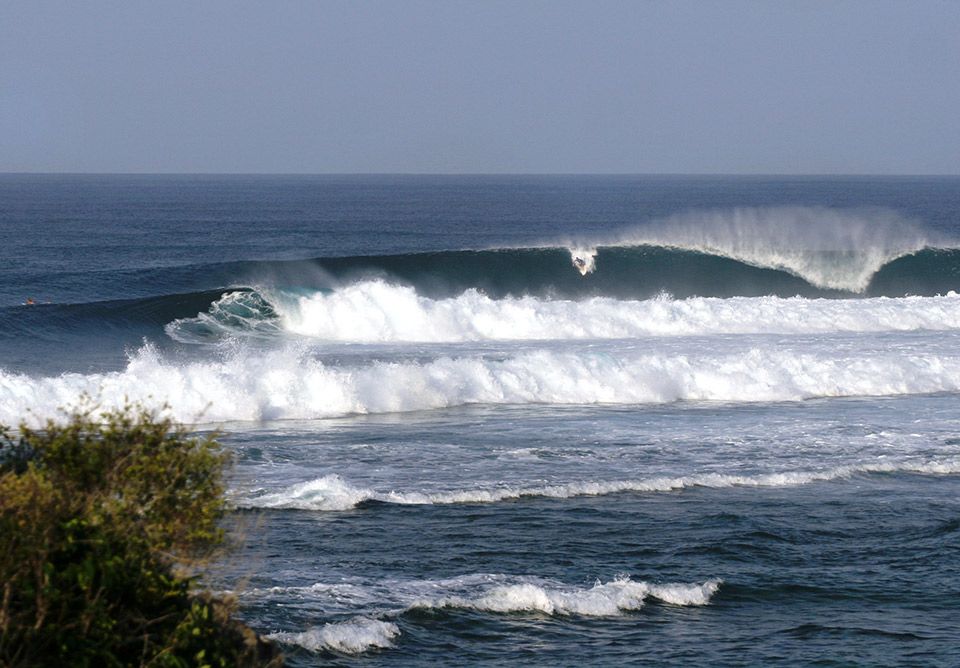 As the more popular surf regions in Indonesia like Bali, The Mentawai and Sumatra become more crowded, more and more surfers are seeking alternatives. Timor and Rote are destinations where adventurers have been finding real quality without the crowds. Most crew head to Rote, a little island off the south-west coast or West Timor that has an interesting selection of offshore island reef breaks including the kilometre long left at T-Land. 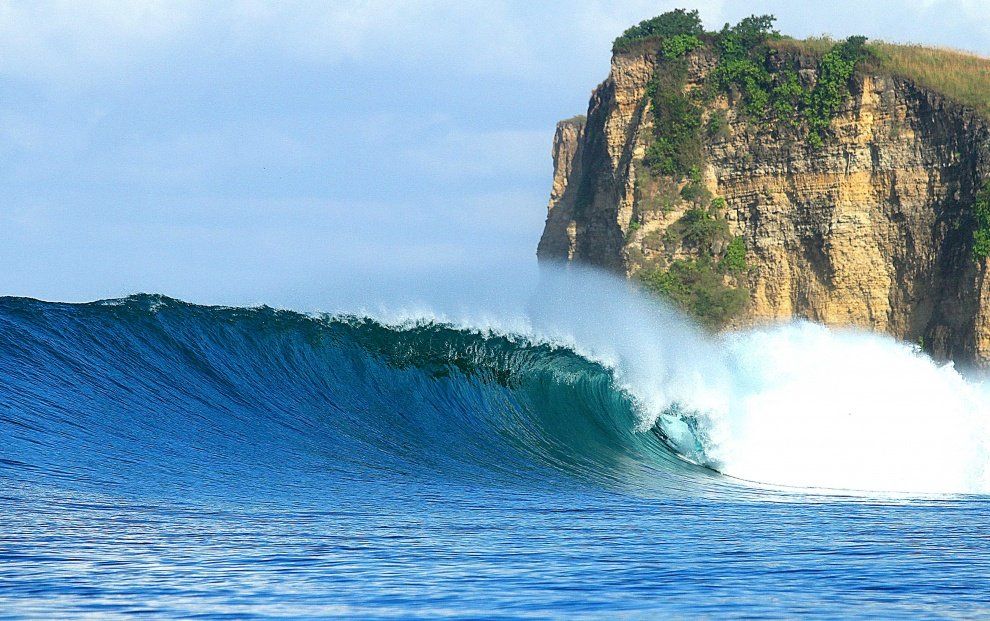 Sitting southeast of Bali, Sumba with its small population, dry tropical climate and traditional rural villages feels very different from other surfing destinations in Indonesia. Nihi Sumba though is the true star, a luxury, eco-resort with exclusive use of the world class “Occy’s Left” out the front. 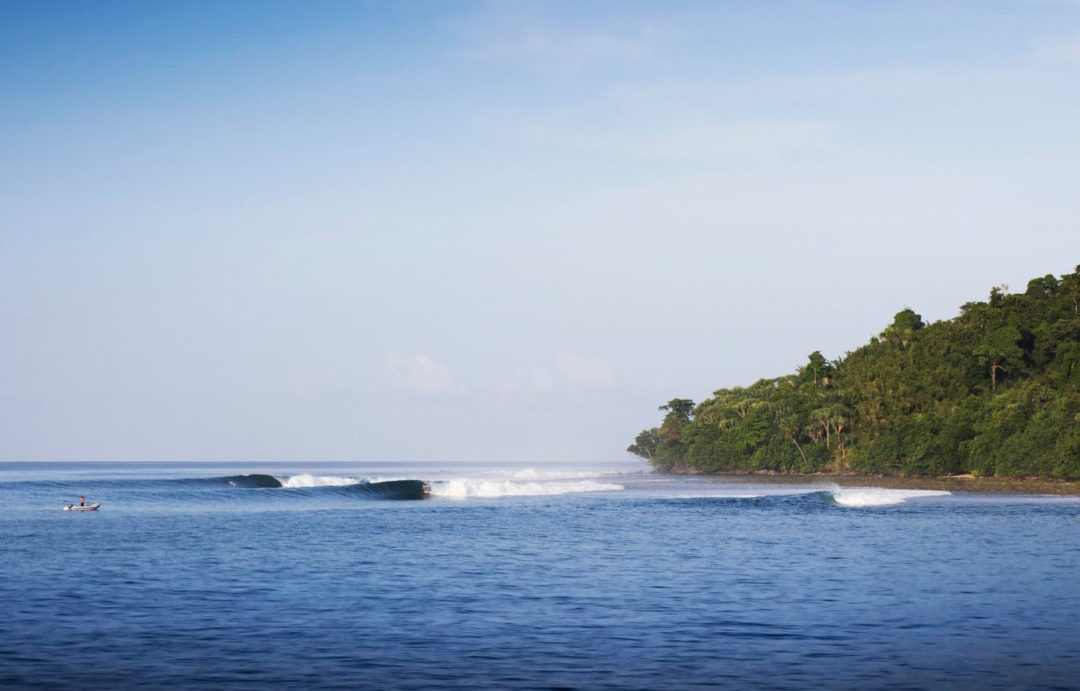 Located off the coast of North Sumatra, the Banyaks is one of the last surf frontiers in Indonesia. Two main islands harbour quality set-ups that pick up plenty of clean, consistent Indian Ocean swells. 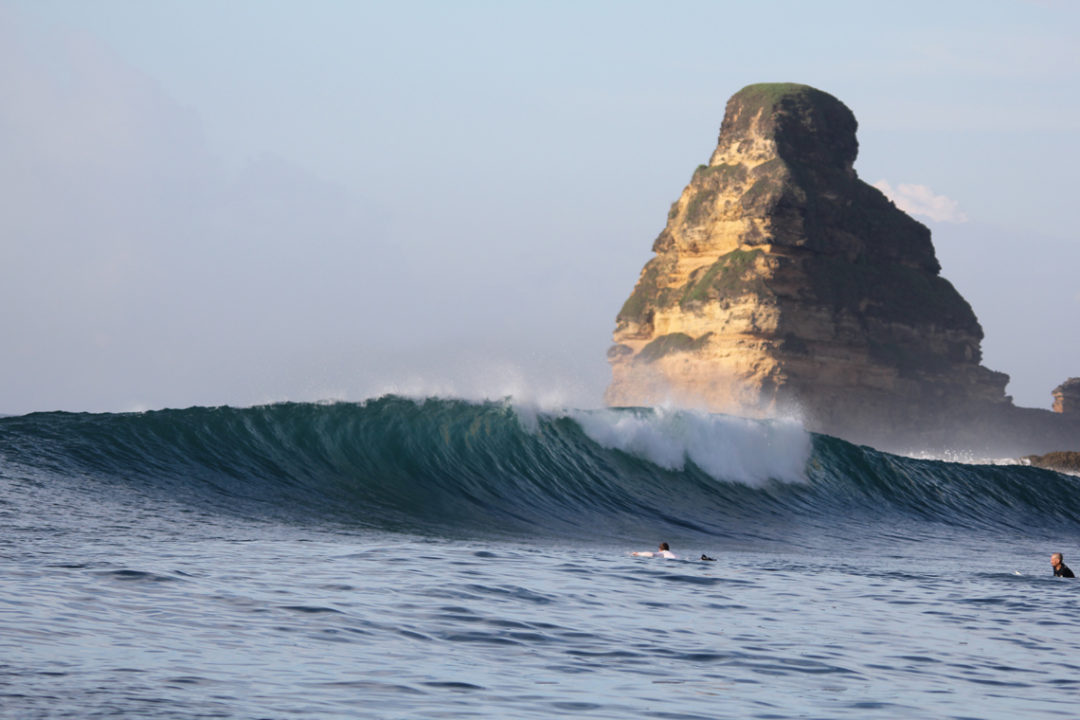 Lombok offers a more chilled out vibe with fewer tourists than its close neighbour Bali. The best wave on Lombok is undoubtedly Desert Point, while the reef breaks around Kuta and the Gili Islands offer real quality and a vibrant mix of tourist energy, beautiful untouched coasts and epic diving. 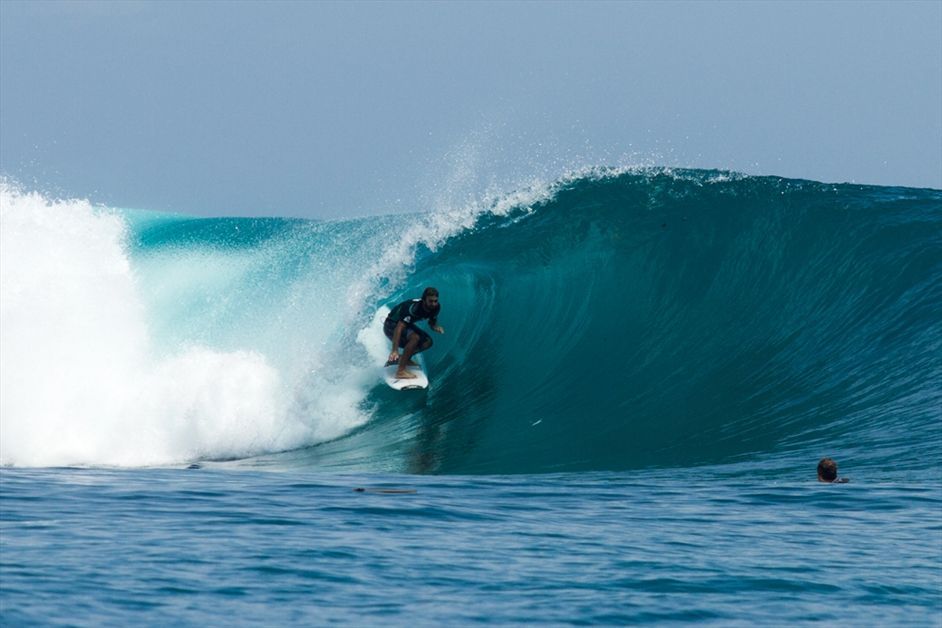 The sparsely populated Sumbawa was no great tourist destination, until surfers carved out a couple of cool, epicentres alongside the two best west facing surfing coasts at Lakey Peak in Central Sumbawa and Scar Reef at West Sumbawa. Each of these locations offer a mind-bending mix of world class set-ups fed by an abundance of Indian Ocean swell. 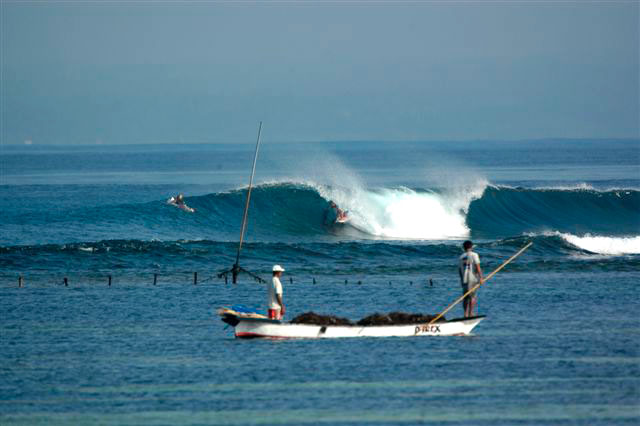 Quick trips to the beautiful, and wave rich, islands of Nusa Lembongan from Bali have now been stoking out surfers and travellers for decades. Choose between epic tubes as Shipwrecks or the learner’s dream at Playgrounds. 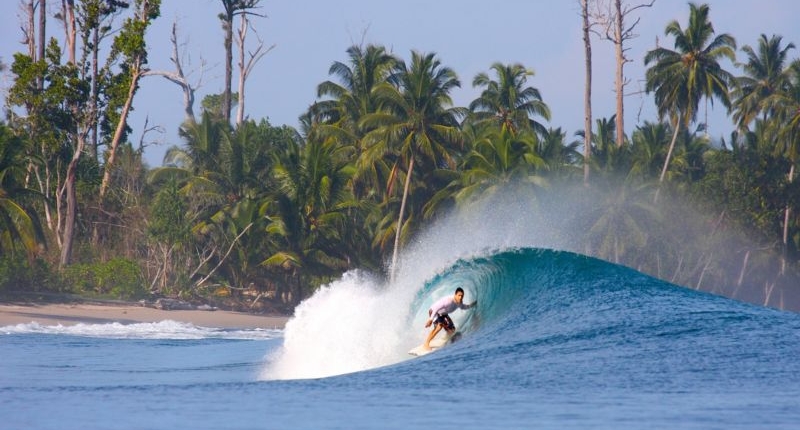 Labeled as the best seven-seconds in surfing Lagundri Bay, on the island of Nias, become the poster wave for Indonesia’s mix of perfection and adventure almost 40 years ago. More recently it was one of the few waves to emerge from the deadly 2005 earthquake with its reputation intact. In fact, the wave actually improved. And while Lagundri Bay, with its perfect barrel and dry-haired paddle out is the jewel, there are plenty of other great waves on Nias. 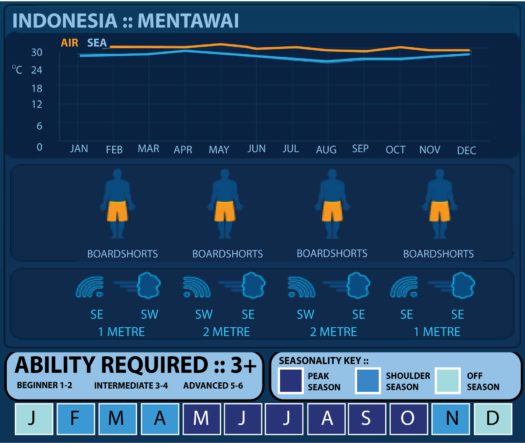 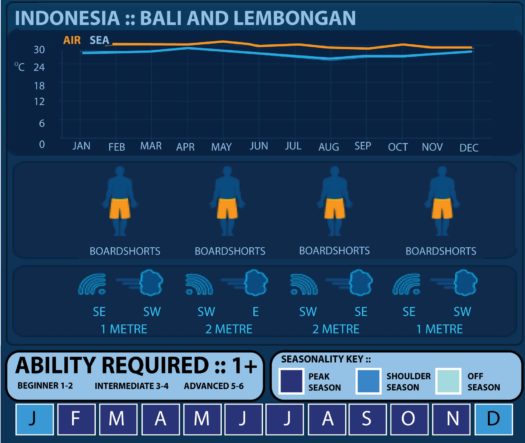 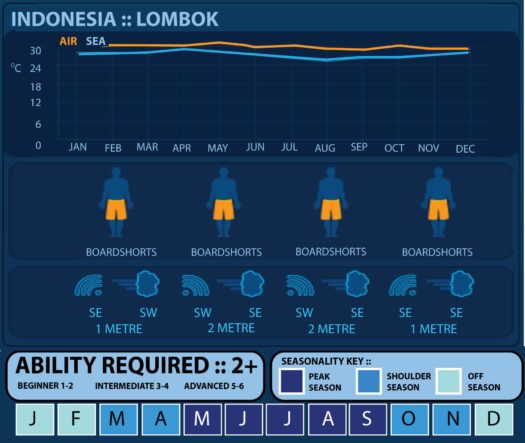 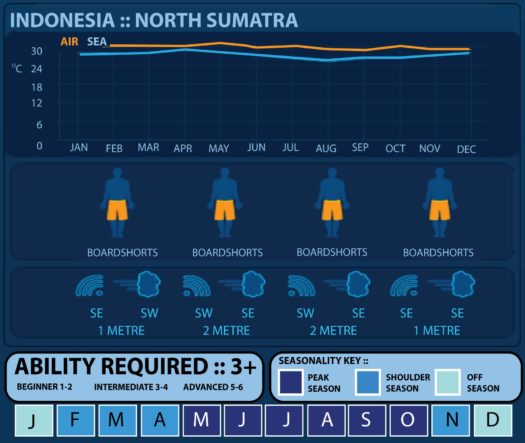 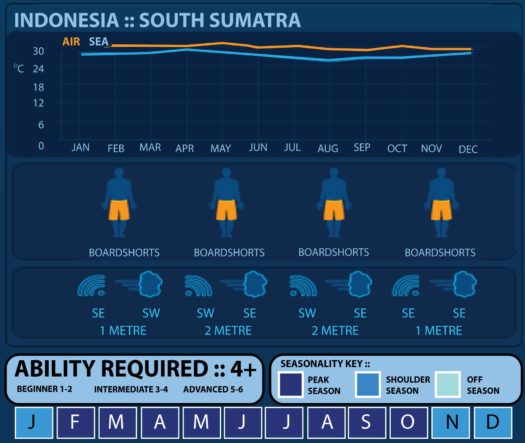 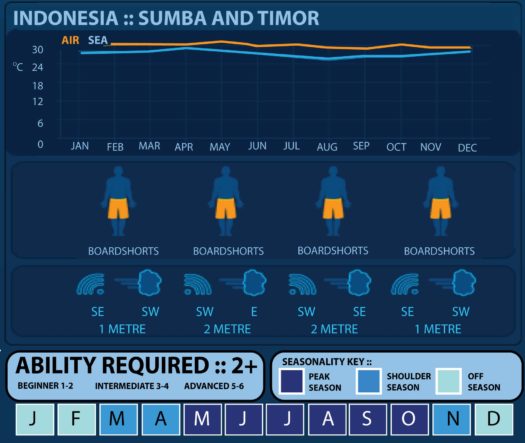 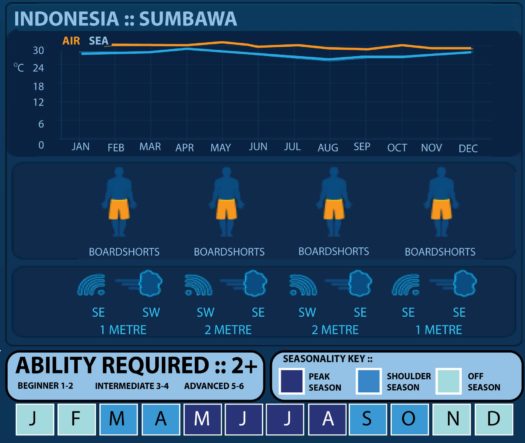 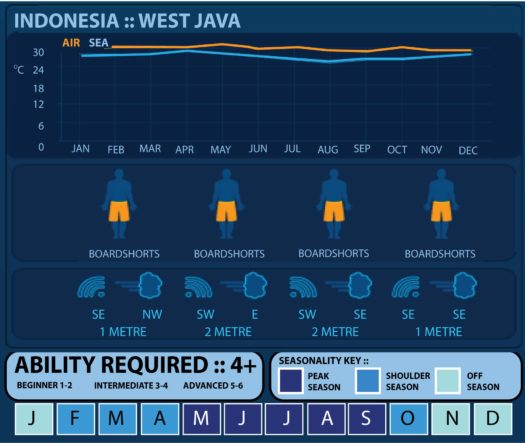 There are two seasons in Indonesia, the dry and wet season. The dry season, which runs from April to October, is considered the best for waves. That’s because the Indian Ocean winter storms produce consistent swell which are met by the southeast trade winds. These trades are offshore on all the swell facing coasts, including waves like Uluwatu, G-Land and Desert Point. The weather is also consistent with water temps over 27C and average air temps of 30C. The wet season that runs from November to March however still has a lot to offer. Many experienced Indo travellers now hit Bali and the Mentawai in the wet season (known as the off season) as there is less crowds and incredible waves. 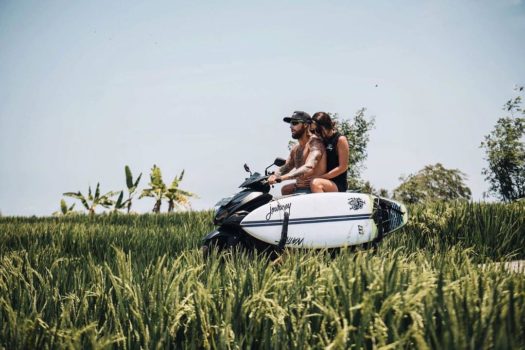 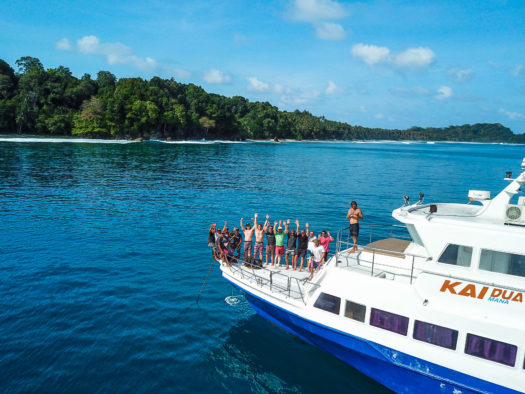 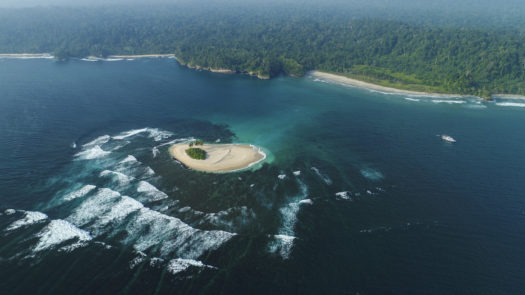 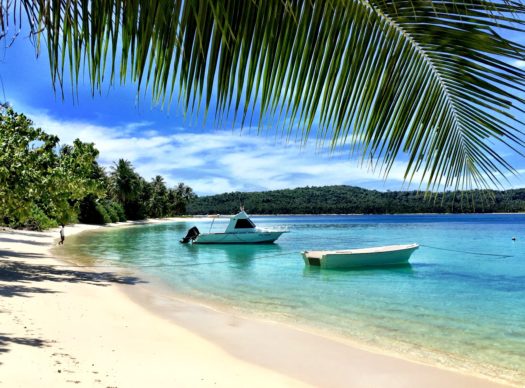 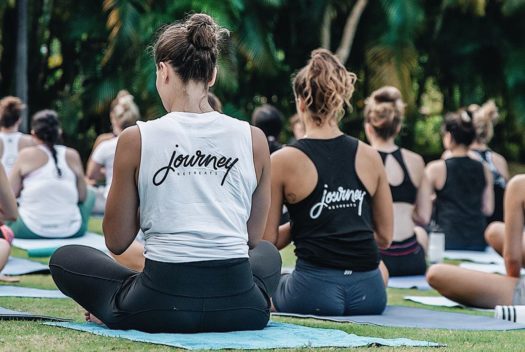 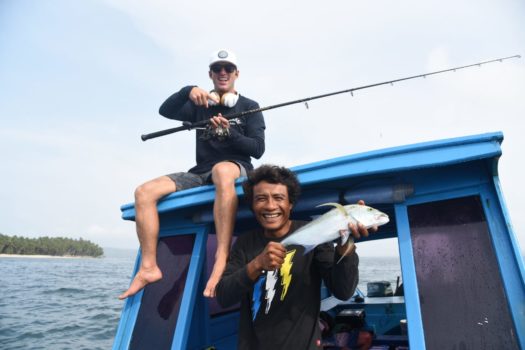 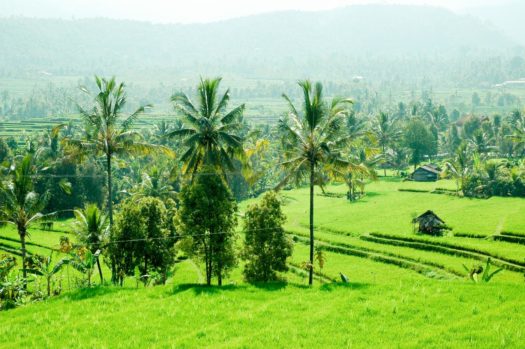 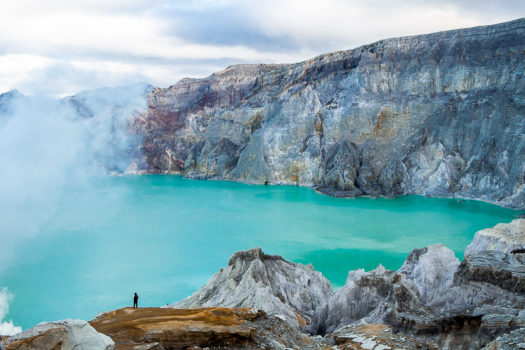 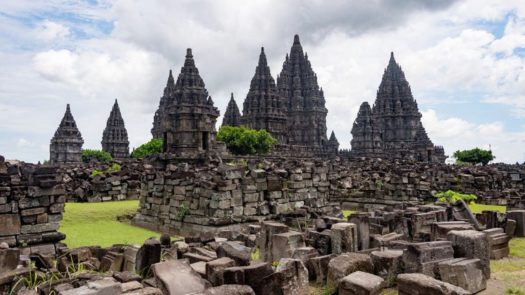 Indonesia offers as many adventures inland as it does on the coast. For the adventurous try trekking through the Mayong village's beautiful farmland, admire the Borobudur temple ruins, or hike around Ijen Crater. Meanwhile, those looking to relax in the sun may enjoy the many island-hopping boat tours, all-inclusive resorts, luxurious infinity pools, yoga and meditation courses or simply reading on the many secluded white sand beaches. Add the incredible diving and excellent fishing and you almost don’t need a surfboard.

With over 255 million people, Indonesia is the world’s 4th most populated country. Consisting of thousands of islands, Indonesia is rich with tropical oceans, delicious fruits, and impressive volcanoes. Even with the nation’s large population, there are many opportunities to escape the crowds by visiting the country’s outer islands, rainforests, and beaches. Over the millennia, Indonesia has been controlled by many world superpowers – including the Dutch, French, British, and Portuguese. Since the end of World War II, Indonesia has remained a free nation with a constitutional government. Because of this diverse history, Indonesia has a unique blend of island culture, Western Colonialism and the teachings of Islam. It is a fascinating and sometimes frustrating destination, but one that rewards the traveller who takes any time to understand it.