Hawaii is the birthplace and spiritual home of surfing. The North Shore of Oahu remains the ultimate testing ground and nowhere on Earth can boast a higher density of world class surf breaks within such a short distance. Meanwhile Waikiki on the south shore of Oahu and its gentle, sloping waves offer the perfect antidote to the power of the North Shore and a great place to learn to surf.

Waves like Pipeline, Waimea and Sunset are the big-wave gold standard

Crowds are an issue, but empty(ish) spots do exist

The North Shore of Oahu, aka the “Seven-Mile-Miracle” is obviously Hawaii’s biggest drawcard, yet the outer islands of Kauai, Maui and Big Island all offer some quality uncrowded options for more mellow adventurers. Along the seven-mile stretch of coast on the North Shore there are some 40 surf breaks, some being the best known in the world. 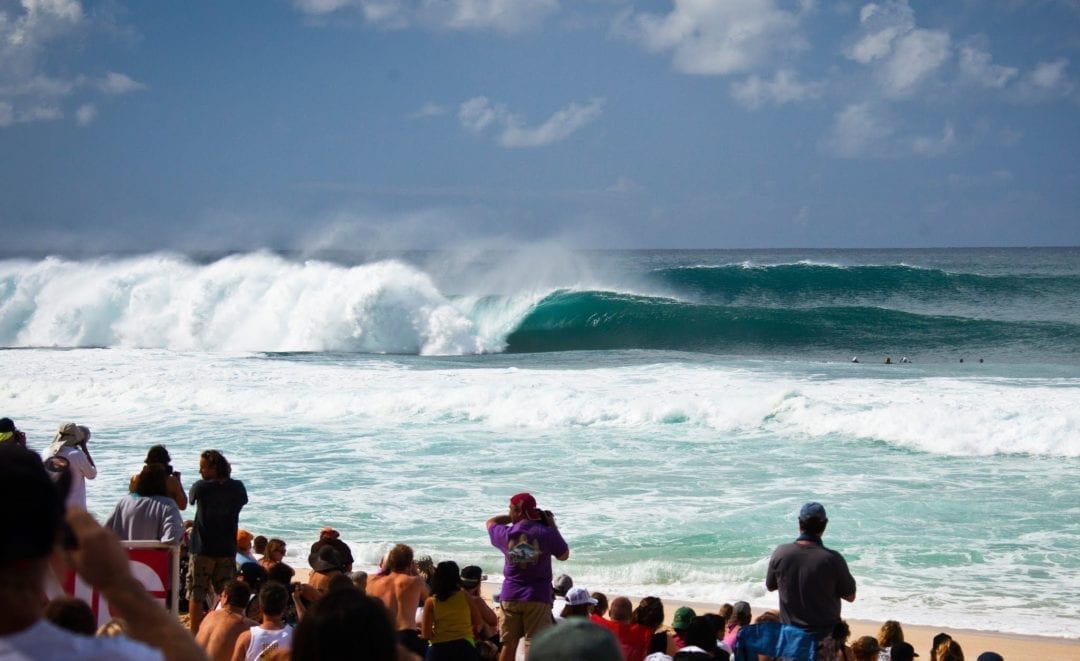 Banzai Pipeline – Pipe is a legendary wave that demands a surfer’s respect. It is the final stop of the Triple Crown of Surfing as well as the ASP World Tour. It’s a super fast, ledgy left hand reef break with one of the best tubes in the world. 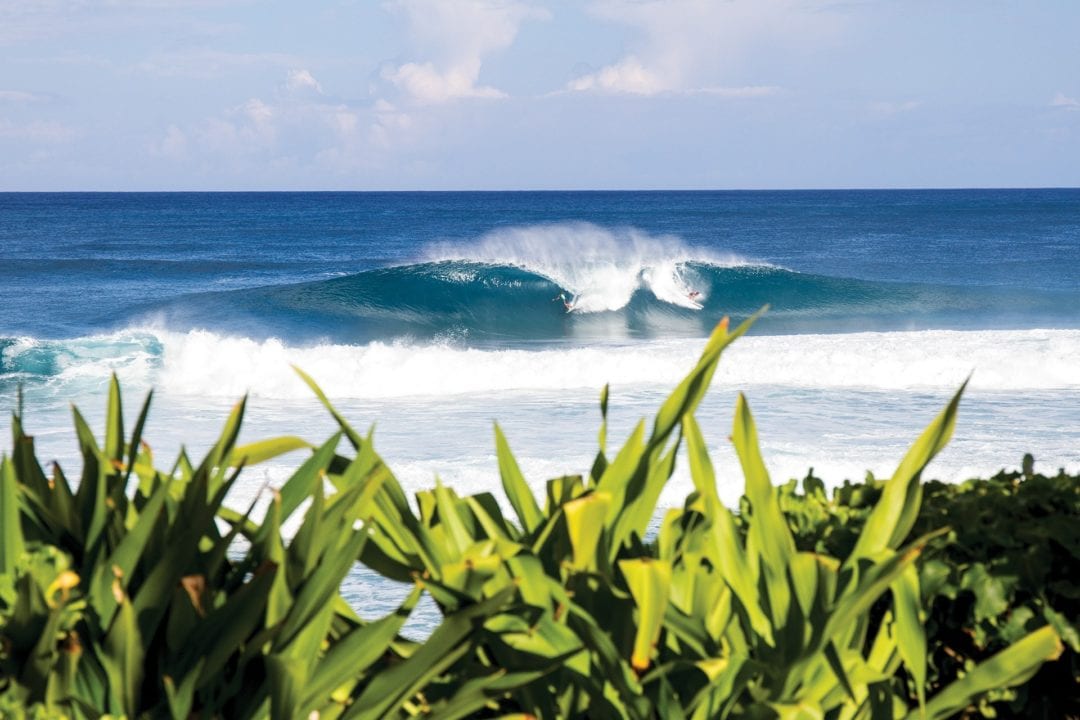 Backdoor – The same take off zone as Pipe, but a right hand barrel that breaks over very shallow reef. It’s hollow, fast and powerful. 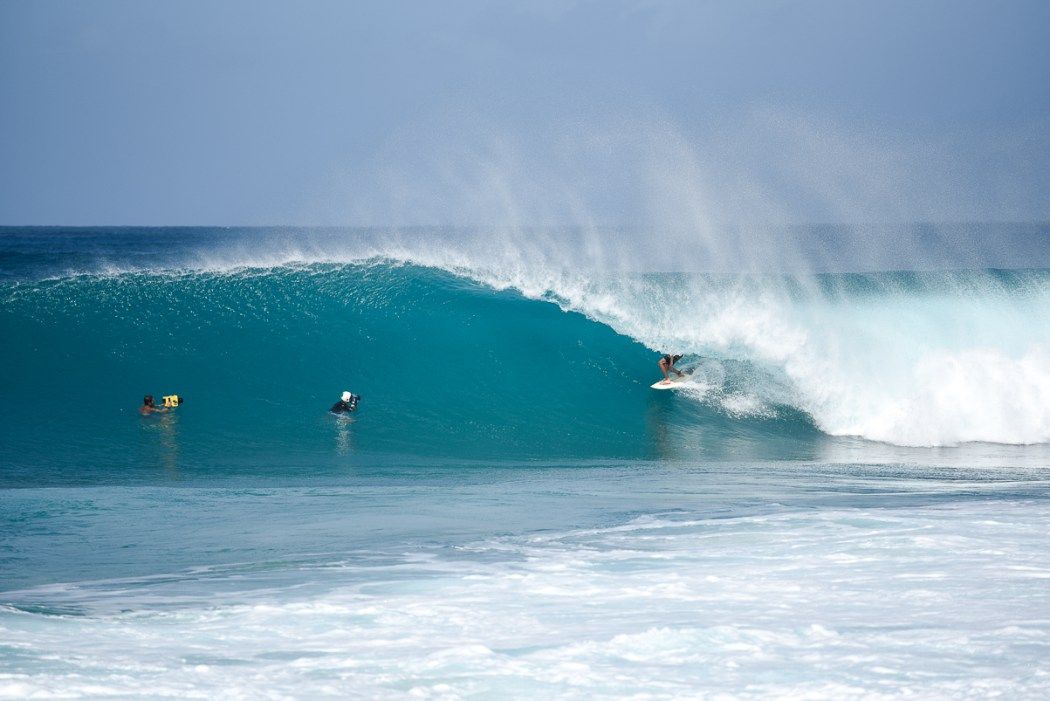 Off The Wall – Mostly a hollow, fast and powerful right tube, with some lefts but closes out on the inside. 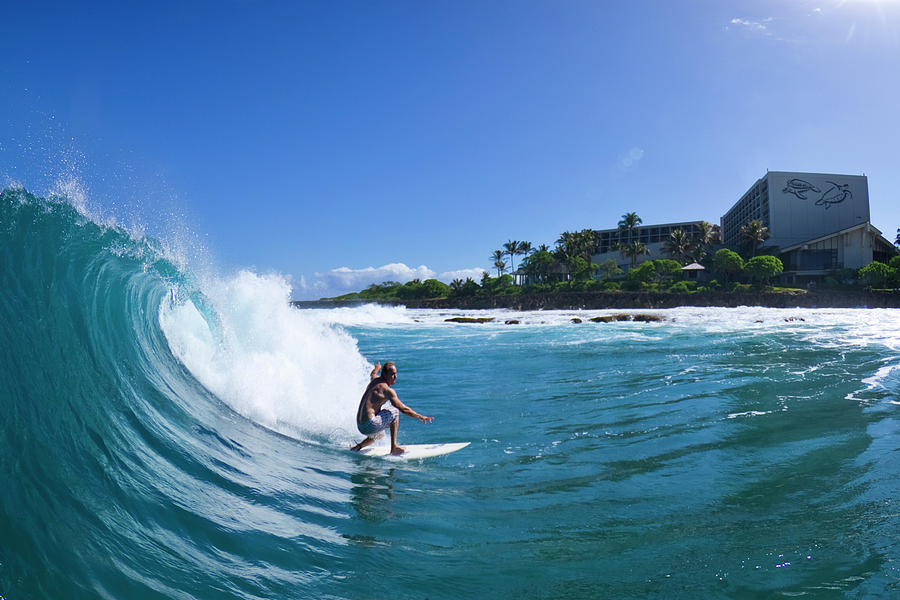 Turtle Bay – On the west side of the resort, a hollow, fast and powerful right reef break when the swell is up, and a fun longboard wave that can take you over a hundred yards when its smaller. On the east side of the resort there is a right called Rainbows that gets fun when there is more east in the swell. Further east from Rainbows is Baggers, a very long and hollow left tube over shallow reef. 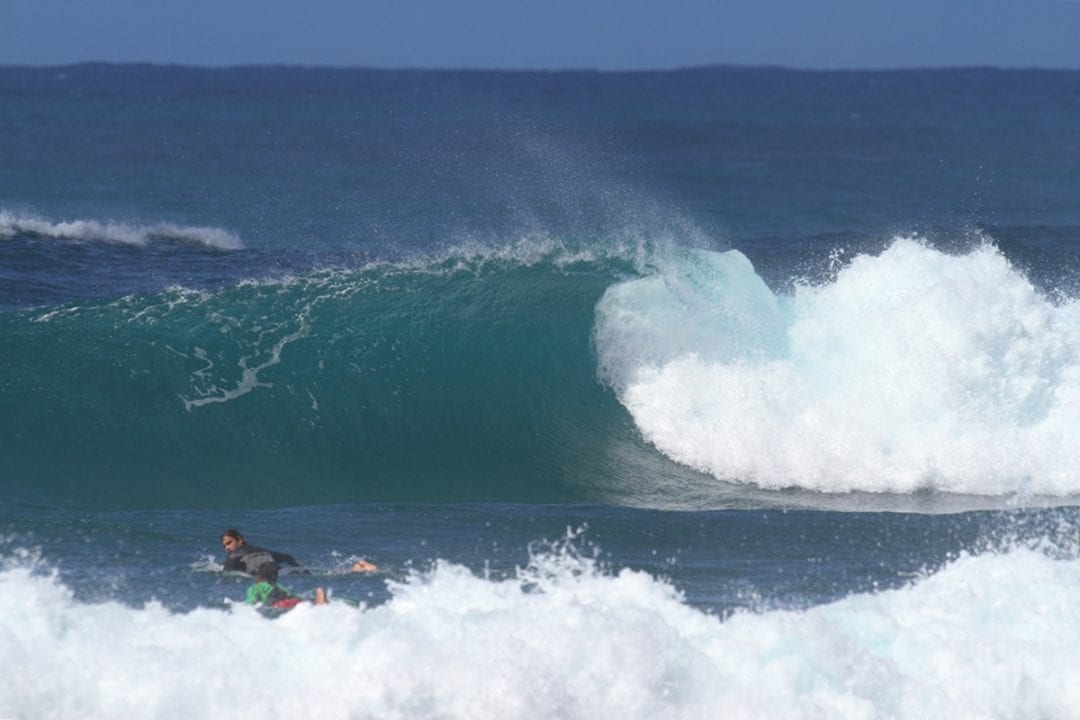 Velzyland – This wave is an amazing right hander with rippable walls and long barrels. When it gets really big, there is a left called Freddies on the south side of the same bay, and behind them both is a big wave spot called Phantoms. 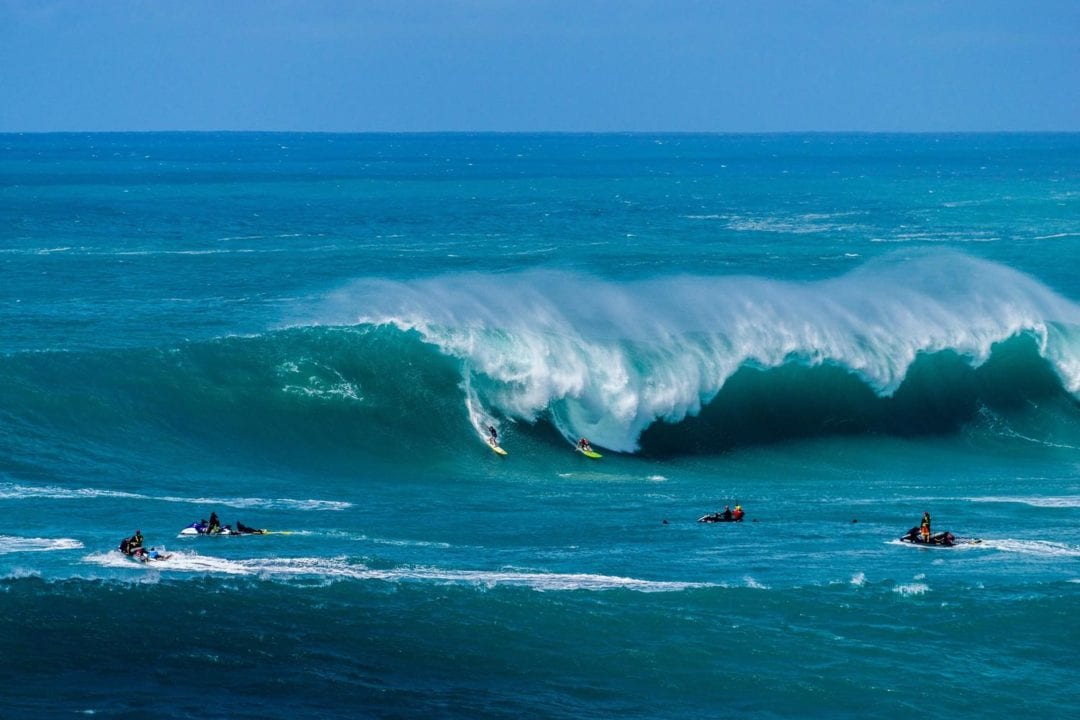 Waimea Bay - One of the first recognised big wave surf spots in the world and holds swells up to 30ft. 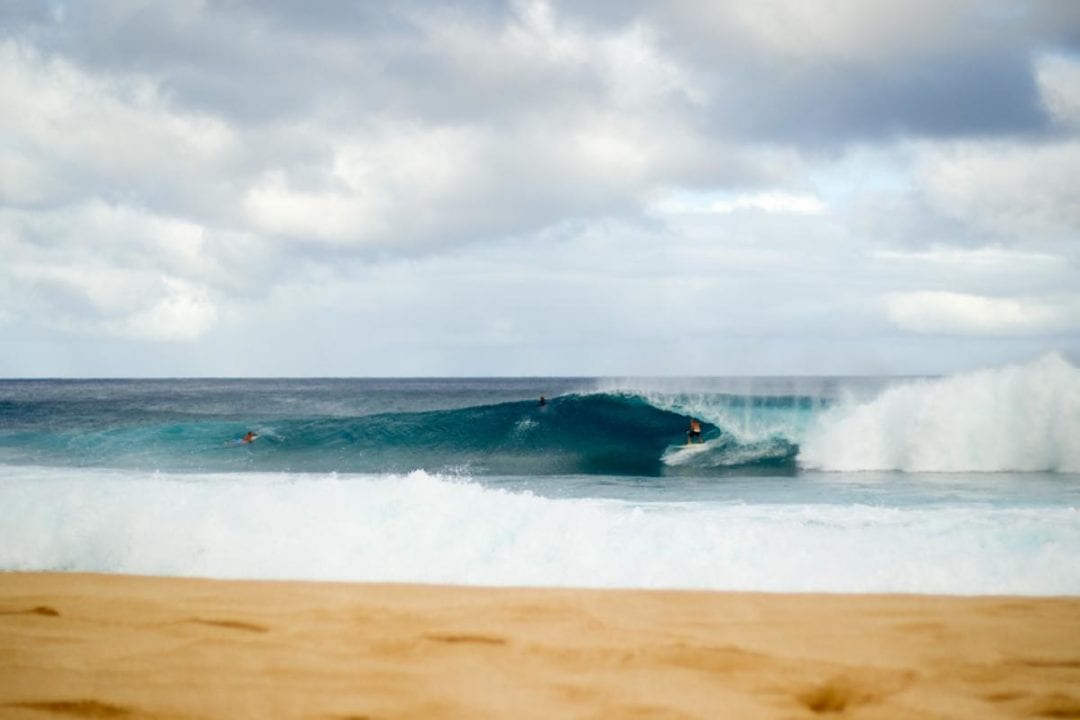 Log Cabins – Fast, powerful, very long and can get epic. 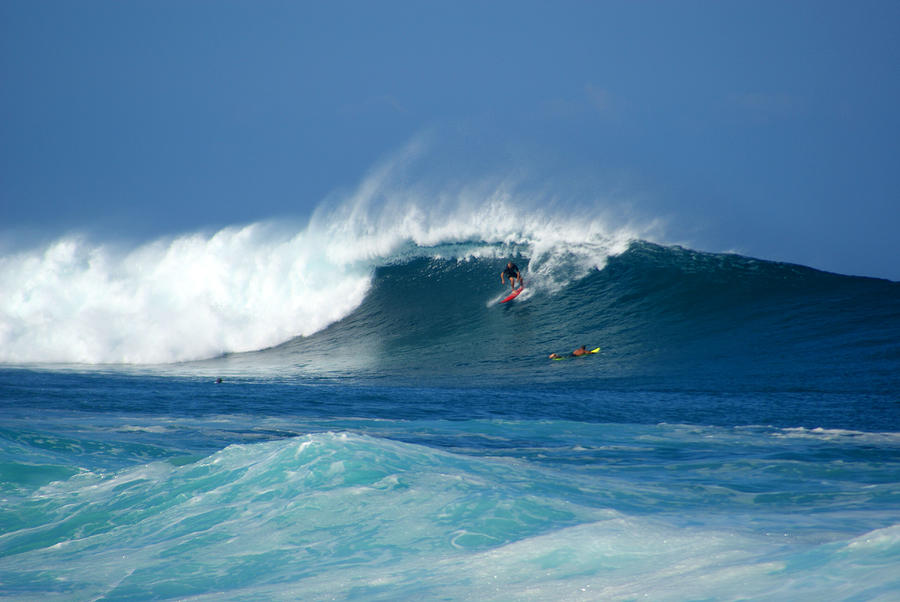 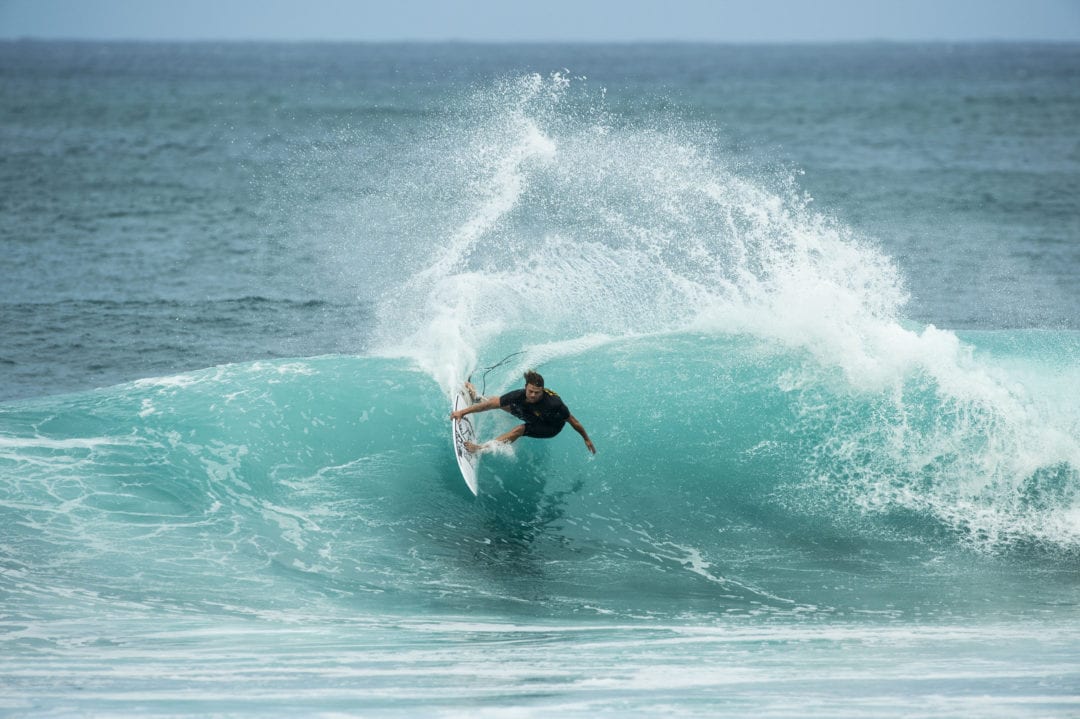 Rocky Point – left and right reef that is the North Shore’s most high-performance wave. 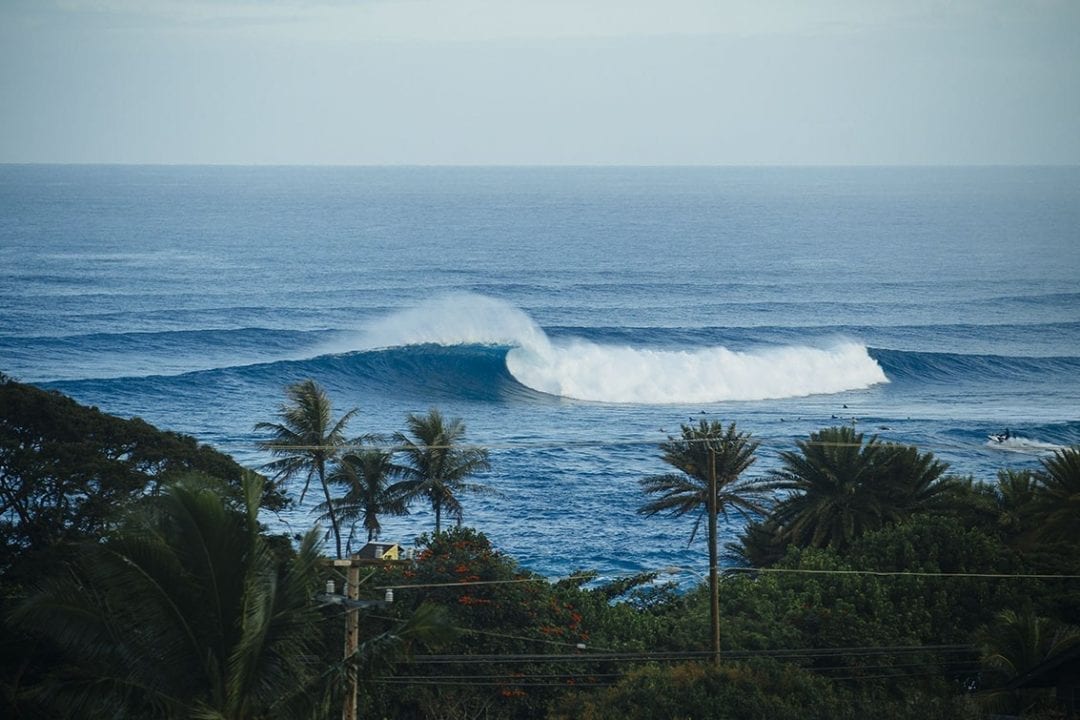 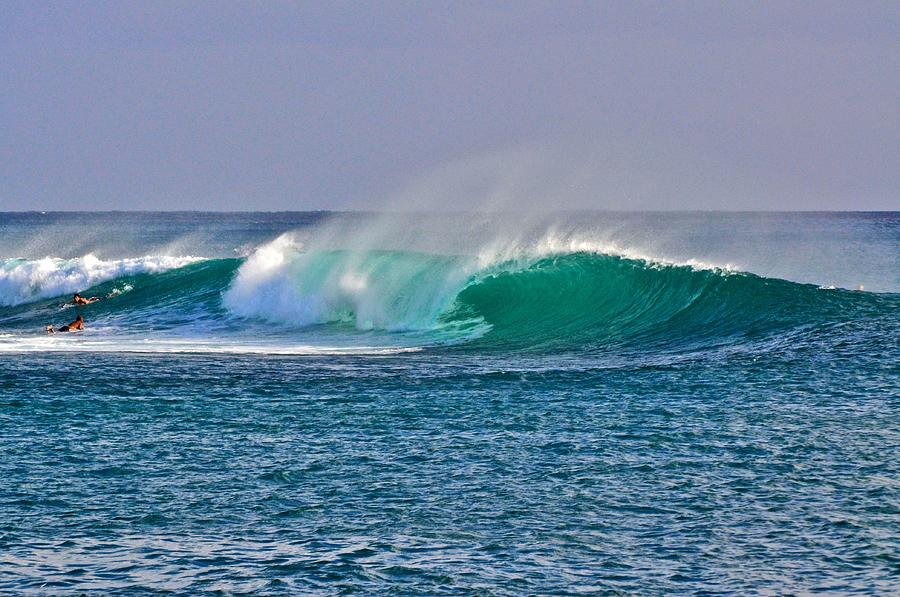 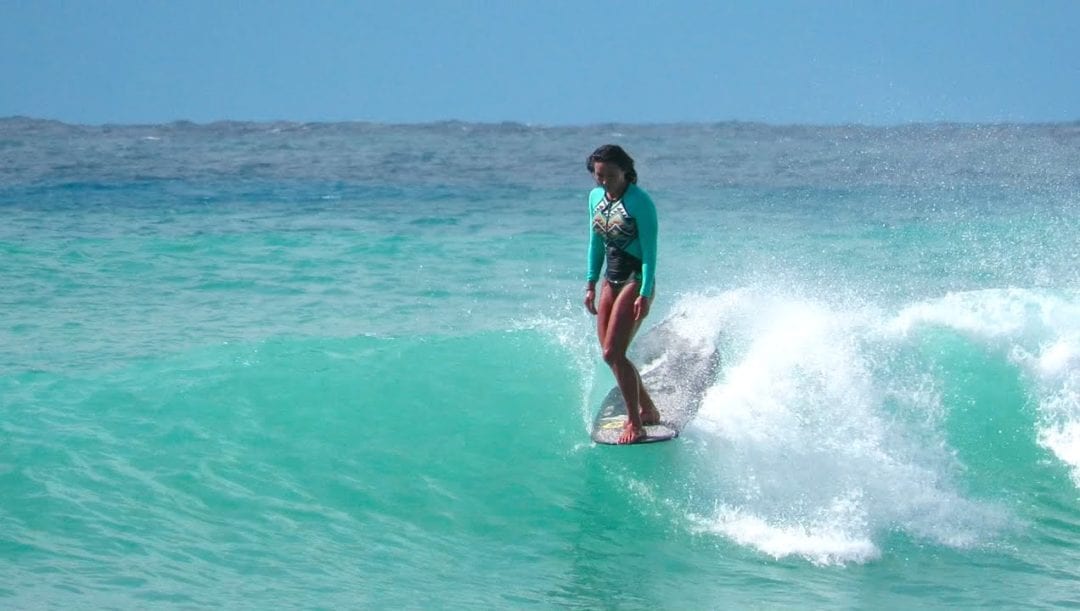 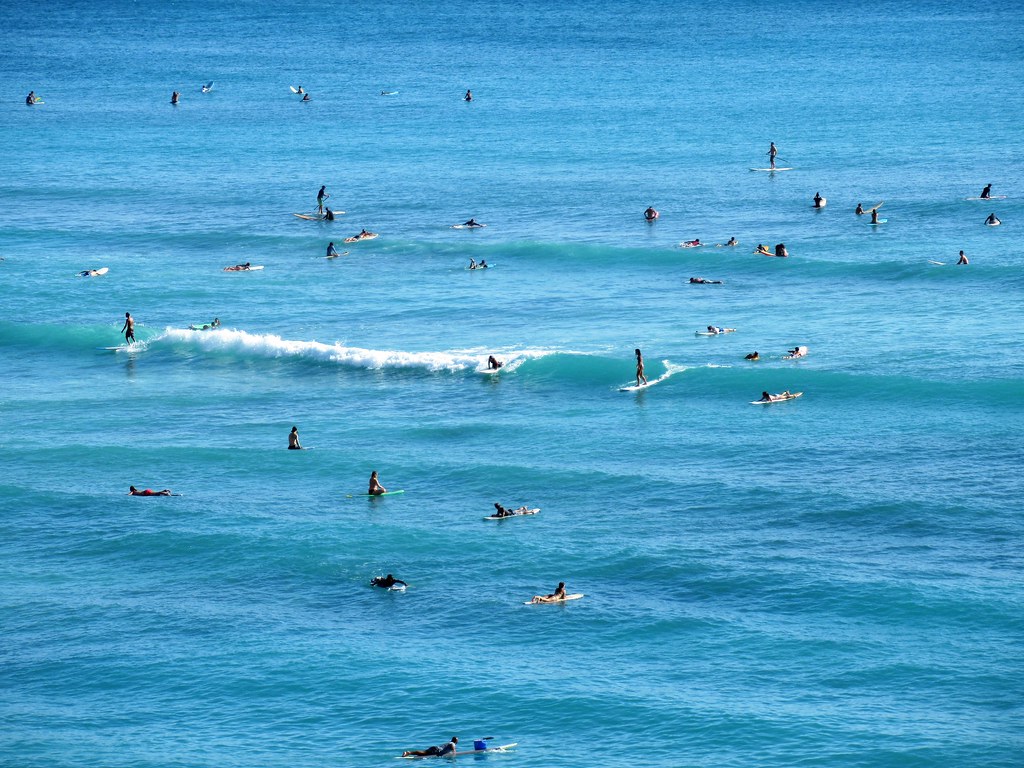 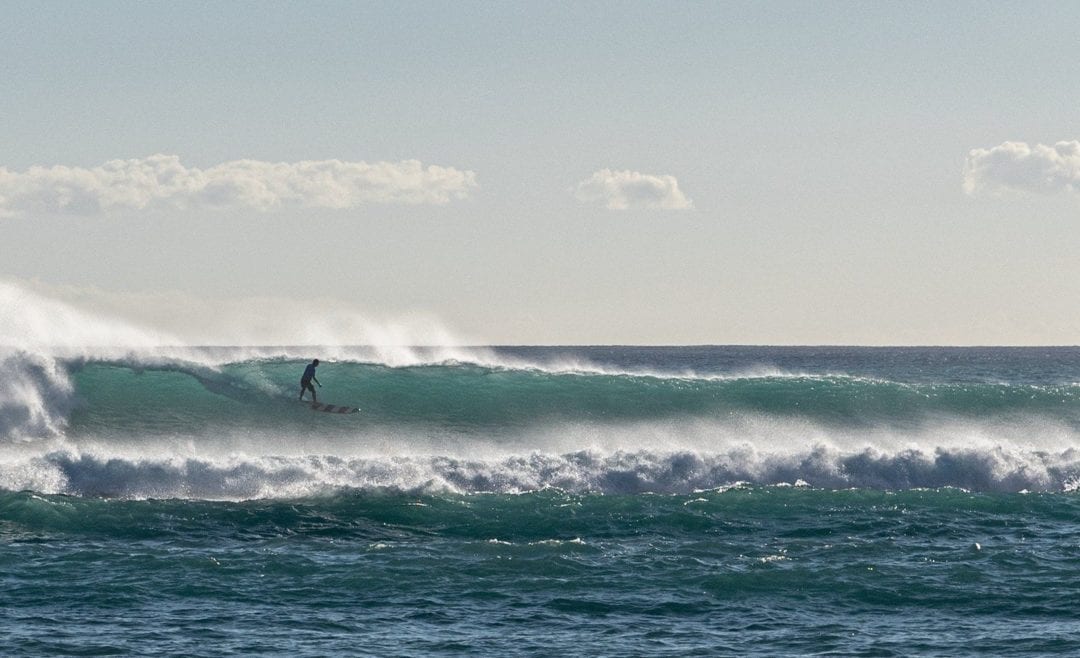 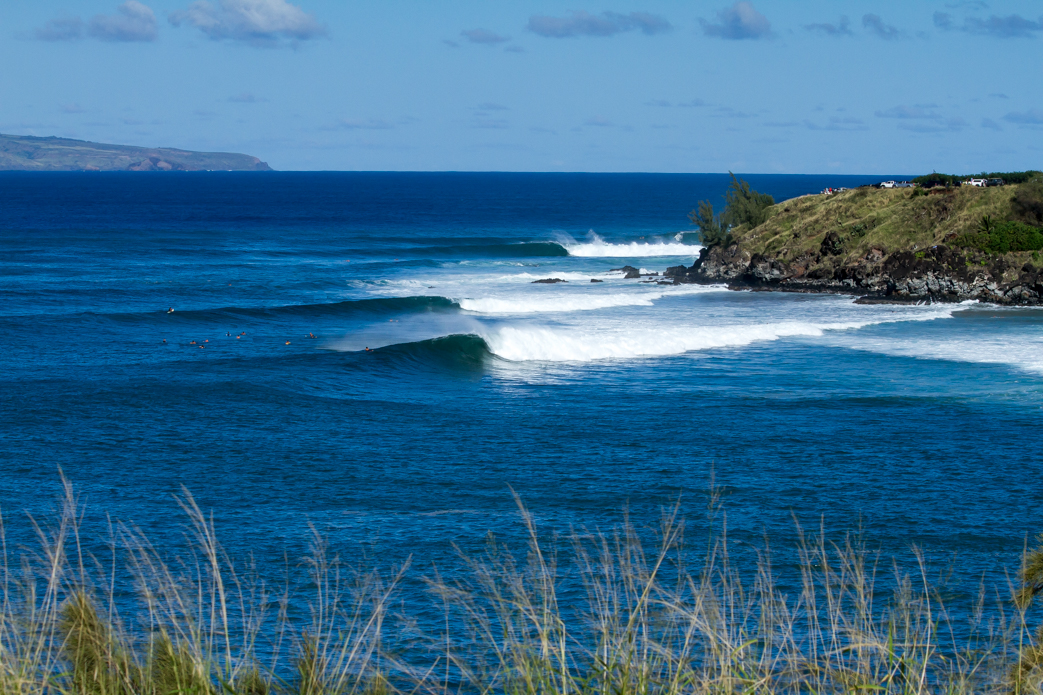 Hanalei Bay – a long right coral reef point break. Classic set up in a stunning bay and surf town. Handles anything from 2 feet to 15 feet 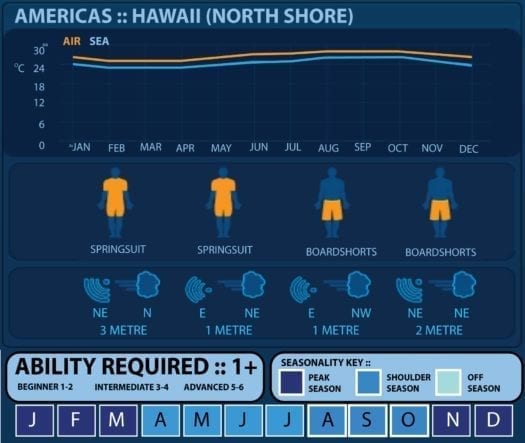 Located smack bang in the middle of the North Pacific Ocean the North Shore of Oahu is wide open to the powerful winter west and north swells. The best time to visit the North Shore is between October and March. November and December are however the most crowded months as hundreds of professional surfers decamp to “The Rock” from all over the world. February, March and October is better for holidaying surfers just looking to surf without the the contests and crowds. The Southern Shore of Oahu also gets its fair share of fun mostly In the summer surf months from May through August when the waves around Waikiki or “Town” come to life. 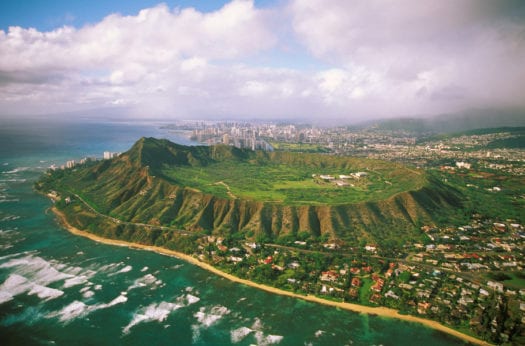 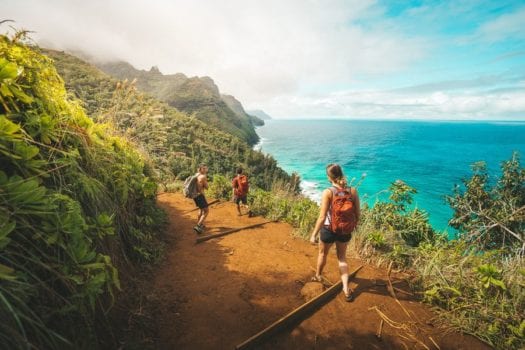 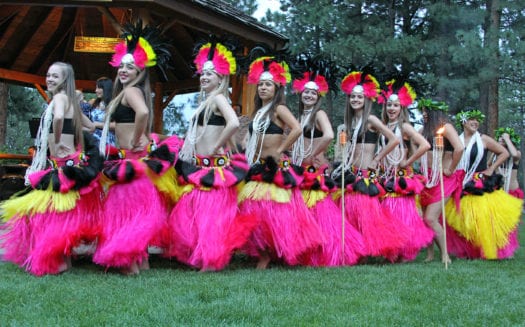 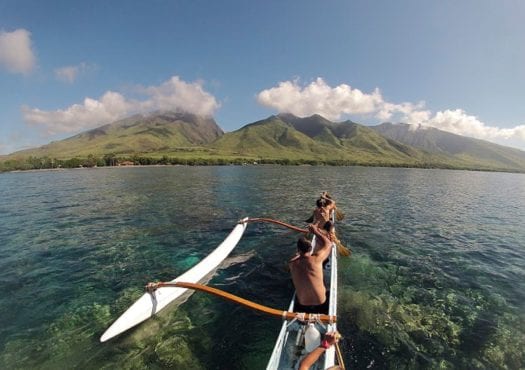 Explore off-the-beaten-track destinations, whether they are hidden beaches or towns that you won’t find on a postcard. Learn to surf or kayak or go to an authentic luau where you can get a taste of Hawaiian culture and watch the art of hula. From romantic escapades, whale watching, volcano hikes, family fun or buying gifts at countless Hawaii surf shops it’s possible to do it all or simply sit back and enjoy Island time.

Hawaii was an independent republic until first became a territory of the United States and then a state in 1959. The state encompasses nearly the entire Hawaiian archipelago, 137 islands spread over 2,400 kilometres. Hawaii’s diverse natural scenery, warm tropical climate, abundance of public beaches, oceanic surroundings, and active volcanoes make it a popular destination for tourists, surfers, biologists, and volcanologists. Because of its central location in the Pacific and 19th-century labour migration, Hawaii’s culture is strongly influenced by North American and East Asian cultures, in addition to its indigenous Hawaiian culture.

The Honolulu International Airport (HNL) on Oahu is the major point of entry, while and short, 40-minute domestic flights are available to the outer islands.

A luxury resort located on the North Shore of Hawaii's main Oahu Island, the area known for the world's most famous surf breaks

A beautiful beach house right outside the Pipeline. There is no better way than staying at Pipeline Beach Cottage.

Pipeline Beach Cottage is right on the beautiful beach, Pipeline.

At Sunset Beach House you have a chance to experience the beauty of Oahu in a beautiful, absolutely beachfront house that fits 8 guests

Experience the beauty of Oahu in a beautiful, absolutely beachfront house that fits 8

From rocky point breaks to world class beach breaks to big wave reefs, France has enough waves and swell to keep everyone entertained.

Rocky points to world class beach breaks and big waves, France has a plethora of surfing