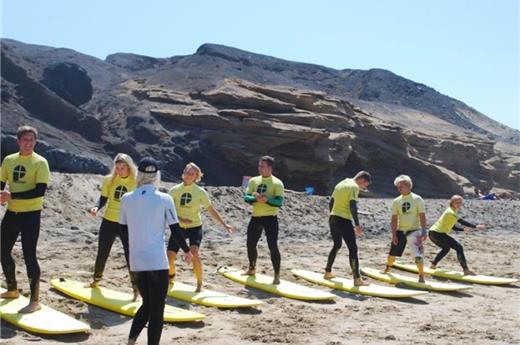 Just off the coast off the northwest coast of Africa, The Canaries are a part of Spain, so close to Europe but feel so far away!  Made up of 14 volcanic islands, of which only 6 are famous for surfing.   These islands in the Atlantic Ocean are renowned for being shallow, heay and hollow, breaking over reefs.  There are more mellow beachbreaks there too for learners.  Lanzarote, Fuerteventura, Tenerife and Gran Canaria are very different however each has dramatic scenery and fantastic waves.  Lanzarote has a dry climate and is very much a cross between Mexico and the moon! Although quite localised, if you smile and have respect, you can find some great waves to surf.  Fuerteventura is a little more commercialised up north in Correlejo with all kinds of waves for all kinds of surfer.  Tenerife and Gran Canaria are perfect for surfers that want to enjoy a bit of nightlife and shopping too.

Lanzarote has the best quality waves in the Canaries.   When the NE winds drop, check out Jameos del Agua which is the longest wave on Lanzarote.  The beachbreak of Famara is the ideal place to learn to surf and the northeasterly blows off-shore winds over this spot.  Go and explore the island, there are so many great wave to surf, best to hire a car to find the perfect bay depending on the wind.

Lanzarote: For luxury aparments, beachside bungalows or the surf house, look no further than the Costa Noreste

Surf Charter Boat:  Jump on the Marro Boat and explore the waves around Fuerteventura and Lanzarote

Hire a mountain bike and go and check out the volcanoes in Lanzarote.

Use the winds and learn to Kitesurf or chill out and take a yoga class – ask your surf specialist for details.

The islands have a subtropical climate with long warm summers and moderately warm winters.  When swell hits the Canaries, it’s had a long way to travel over the open ocean so the swell period are long.

The autumn, winter and springtime bring powerful waves giving the islands their nickname of ‘The Hawaii of Europe’.  The predominant NE wind is often present and is why the Canary Islands are the perfect stopover for boats on their way across the ocean.  The waves are consistent all year around but best from September to May.  October to April are more likely to have lighter, offshore winds.  The summertime means smaller, less consistent waves and warm weather.  Lanzarote is the most consistent of the islands and the best conditions are from November to around February when the NE trade winds are at their lightest.   You can wear a shortie wetsuit for most of the year in the Canaries as water temperature doesn’t drop much lower than around 18° in winter.

Most famous for its waves. It’s often nicknamed the Hawaii of the Atlantic. A great place to visit in winter, always swell, warm water and sunshine – these barrels are only 3 hours by plane from mainland Europe! You can surf all year round with the best period from September until May. The best months are from October until April as it’s less windy and mostly offshore. The predominant winds blow from the northeast and are occasionally very strong sometimes making surfing conditions difficult. However spots like Famara or La Santa right are well-protected. Spots on the East coast are more inconsistent.

Famara: A huge bay of 5km lies at the foot of the lava mountains. Sandy bottom – left and right peaks whose size depends on the swell direction. A good left near the port of the little village of Caleta Famara.

La Graciosa: Visible from the bottom of Famara Bay. It takes 30 minutes on the ferry from the north of Lanzarote at Orzola. A nice getaway for the day or find one or two night’s accommodation in one of the few little guesthouses. Lost in a lunar landscape surrounded by turquoise water, you can get around by bike. There are quality spots to explore around this unusual little island

San Juan: A perfect left to the west of the bay of Famara, sheltered by the S/W wind that blows towards La Santa.

Caleta de Cabello: Good at high tide. A consistent hollow left that works with a north swell. Ghost Town and Chickens are hollow and radical waves nearby.

Boca del Abajo: Super fast left that breaks in shallow water and works at around 1.5 – 2 metres. From the La Santa Club, take the Isleta road that drops down to a small bay where you’ll find this fun, hollow wave.

Morro Negro: This world-class wave can be found at the south western point of the Isleta. Long walls with hollow sections and a fun beachbreak. Holds a big swell. Watch out for crowds and the long paddle to the lineup.

La Santa: A left that sucks up with good tubes. Super consistent on a high tide. Watch out for the locals who sometimes lock down access to the spot.

El Quemao: a short but powerful left that holds up to 4 – 5 metres easily. Nicknamed the Canaries Pipeline. Only for experienced surfers and kamikazes…

Arieta: When the swell is too big on the west coast, the NE coast works well as it’s is more sheltered. A fun beachbreak located at the south of the village. Fast and hollow waves.

Jameos del Agua: More a summer spot – opposite the carpark. At the north end of the beach you can find a nice spot called Los Aulagas. Fun rights and lefts.

This island has probably the longest beaches of all the islands. It has the advantage of being the biggest island – it’s deserted and windy….a surfer’s paradise! It’s never too crowded, even when the hordes of tourists rush here in the middle of winter. The duneside of Corralejo is especially spectacular.

West and east swells hit a number of reefs on the north coast. Beachbreaks on the west side of the island are well protected from the northeast winds. The winter months are the best time to go, winds are not as strong and come more from the east than the north.

Las lagunas: A short wave with heavy tubes that break into shallow water. Best surfed at a mid-tide with a 1.5 / 2m swell.

La Izquierda: An easier wave to surf than the nearby Bubble. Works very often and is always busy.

La Derecha-The Bubble: Very powerful peak with perfect right and left bowls breaking onto reef. The most well-known spot on the island and this is where the contests are held.

Los Lobos: A right-hand, world-class pointbreak that sometimes breaks for 400m along a small uninhabited island near Carralejo. Really sectiony when it’s small but with a big north swell, the waves are long with 3 nice tube sections. Lots of people and the locals are ruthless when it’s on. There are several ferries mid-morning and the last one comes back at 16:30. Authorisation is required for camping.

The winds control your day of surfing. Check wind direction and how strongly it’s blowing properly to ensure you a have a good session. From October to April the winter wind isn’t as strong and comes from the E / NE. It switches around to the north at the beginning of summer when conditions are often smaller and onshore. The morning or sunset sessions are then usually best.

Tidal range is around 2 metres, quite big coefficients that are very sensitive to deep water spots. Watch out for the power of certain spots and for the locals too. Bring booties to avoid your feet getting ripped apart by the lava and the urchins! Bring a full 3/2 suit from November to May because the water is cool (about 18°). In summer (around 24°) a shortie is enough for the windy mornings