Bathed in warm Indian Ocean current, and with nearly 1600 kilometres of palm-fringed coastline, Sri Lanka is an incredible surf destination. Positioned just south of India in the Indian Ocean you’ll find a land of magnificent landscapes featuring lagoons, fertile wetlands, mysterious forests, mountains, rivers and cascading waterfalls. Sri Lanka has an array of wildlife found in no other ecosystem, inspiring historical and religious sites, and a culture rich in tradition. With the west and east coast catching different swells, Sri Lanka is also a year-round surf trip destination.

Great for beginner and intermediate surfers

Incredible wildlife both terrestrial and marine 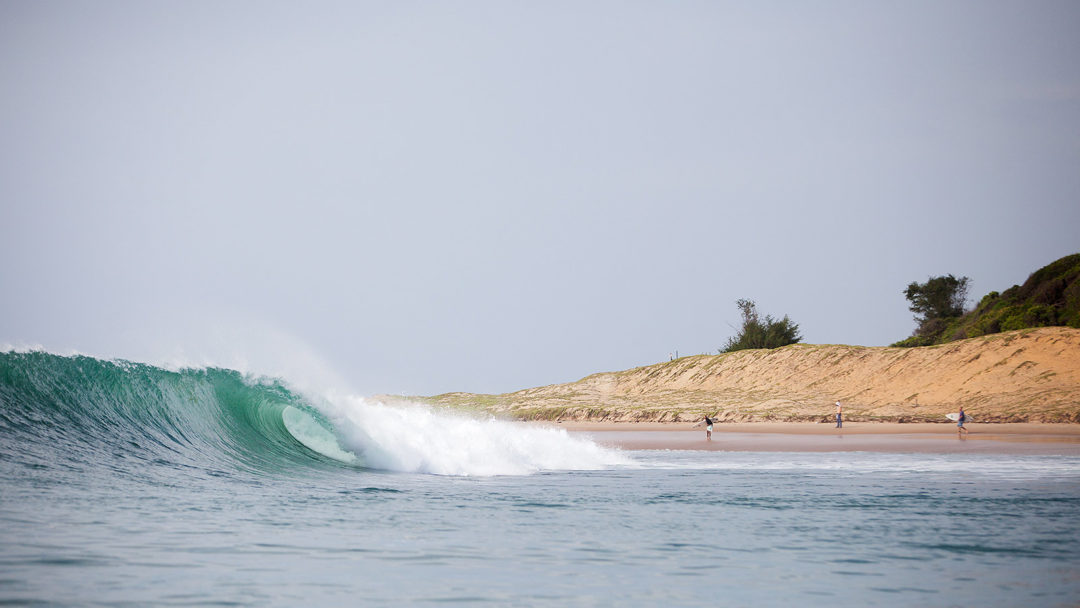 East Coast
Sri Lanka’s jewel, a long right sandbottom point that provides barrels and big turn sections. It is at its best at 3-4ft, but can be surfed up to 6-8ft if conditions are right, but beyond 4-6ft it tends to section. It can get quite crowded, and only occasionally serves up a hollow section here and there – mostly on the semi wedgy take off peak. The best thing about A-Bay is its consistency. It is renowned for having some sort of rideable wave on most days in the season. 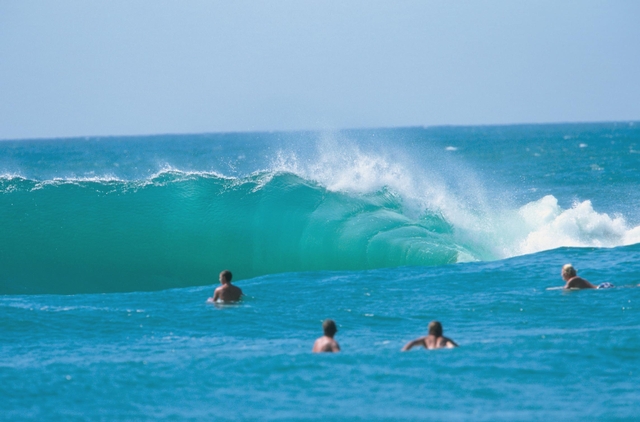 East Coast
A little over an hour south of A-Bay by road is another fun, walled up performance wave with quite a hollow little inside section. There is also a brief opportunity to get covered on the take off- if you can be bothered paddling over onto the trailing edge of the whale- shaped rock shelf. Okanda picks up just as much swell as A-Bay even though it is more sheltered from the predominant south/southeast trade winds that tend to kick in like clockwork around mid morning every day. 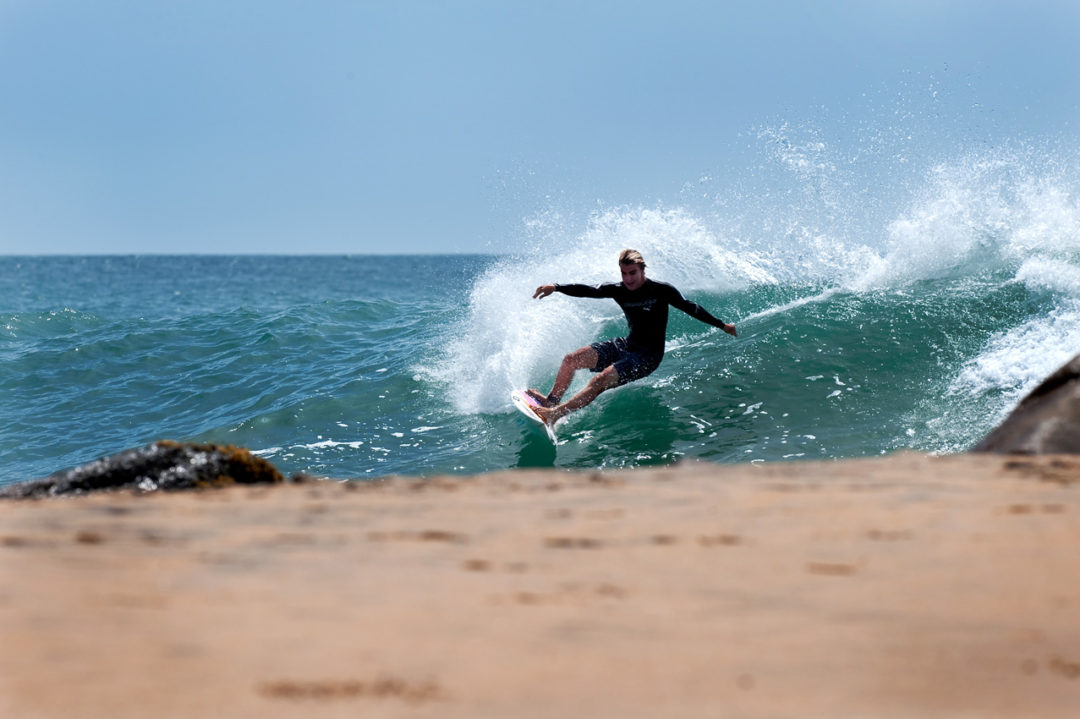 East Coast
Hollow, though it is fickle. It is more sheltered, so only breaks when A-Bay is almost maxing out. The sucky take off section is barely a few metres in front of a series of dangerous phallic shaped boulders, followed by one or more distinct bowl sections before the main Spectators rock. Beyond “Spectators” it reels down the point for another 50 to 100 metres of playful manoeuvring into the beach. Then you can jog back around the Point and do it all again. 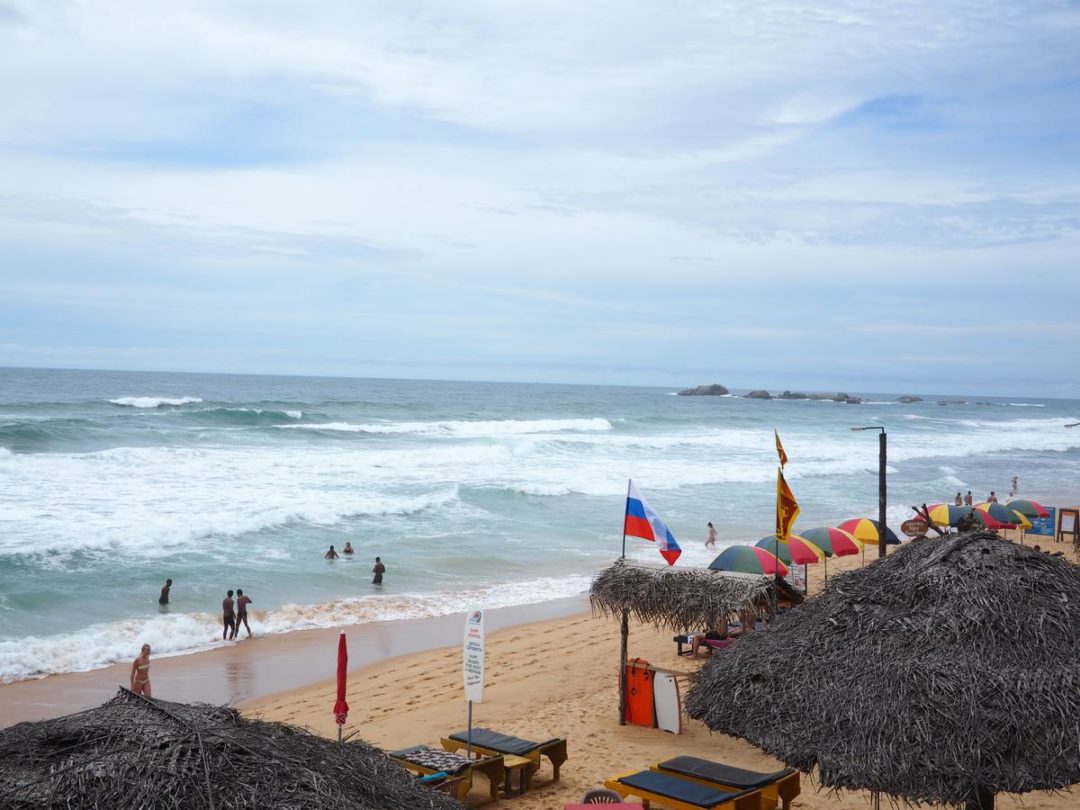 South-West Coast
Exposed reef break that has consistent surf, although summer tends to be mostly flat. Offshore winds blow from the east northeast. Groundswells more frequent than windswells and the best swell direction is from the southwest. A choice of left and right reefs. Likely to be crowded if working. Watch out for coral, rocks, crowds. 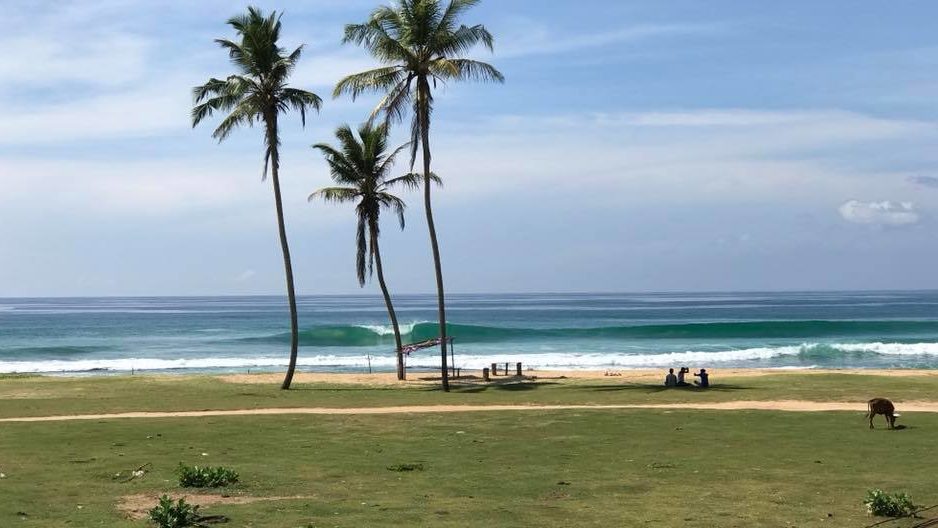 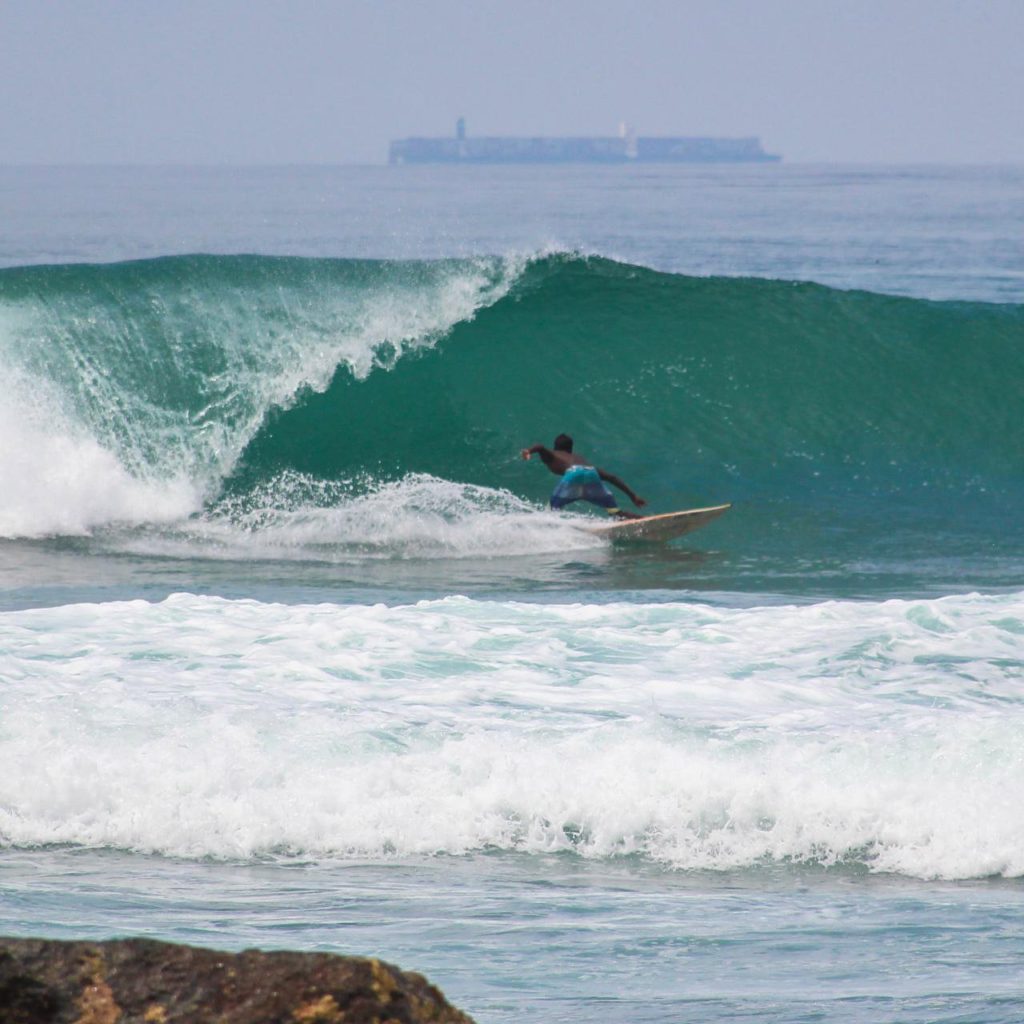 South-West Coast
An exposed point break that has fairly consistent surf. Summer offers the optimum conditions for surfing: winds are from the north and swell direction is from the south southwest. Surfable at all stages of the tide. 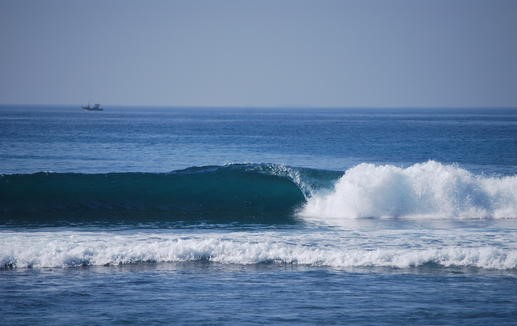 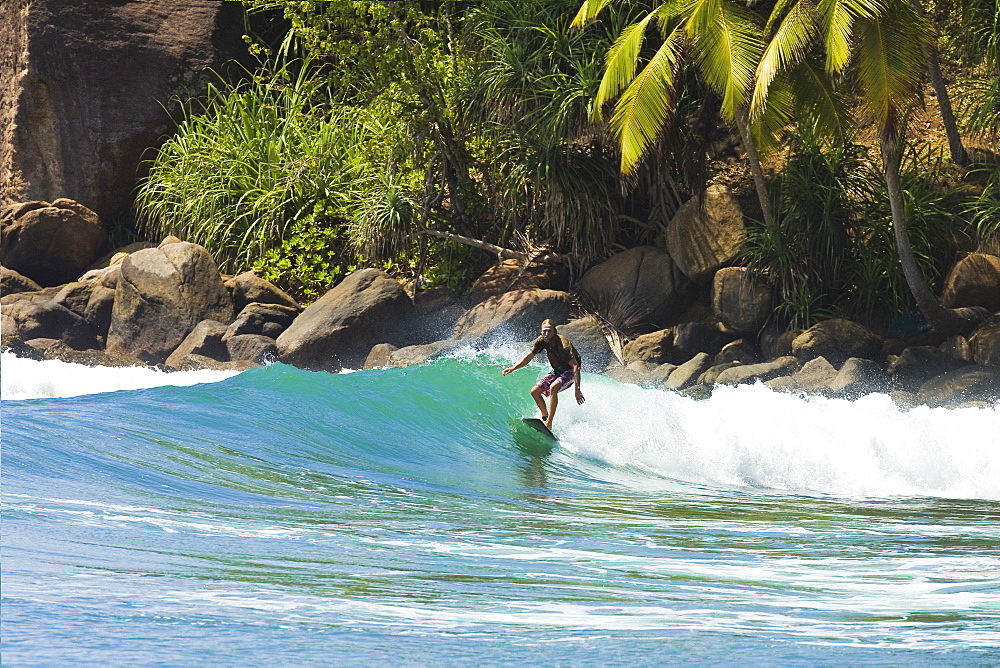 South-West Coast
An exposed reef break that has quite consistent surf, although summer tends to be mostly flat. Ideal winds are from the north. Groundswells more frequent than windswells and the ideal swell angle is from the southwest. Likely to be crowded if working 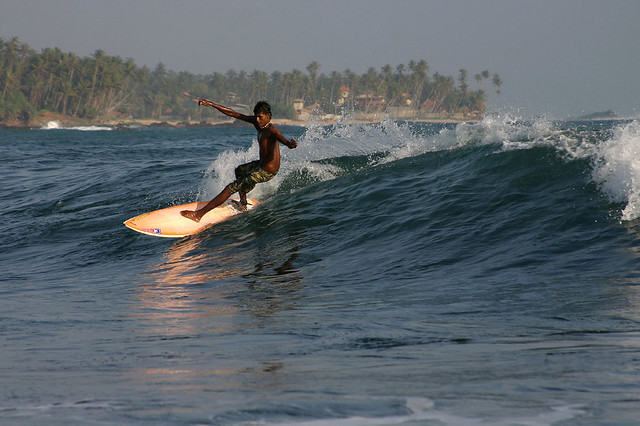 South-West Coast
Unawatuna Bay or Wella Devalaya is 5kms from Galle towards Midigama. It is a powerful righthand reef break for experienced surfers. User friendly beach breaks are found closer in the bay. 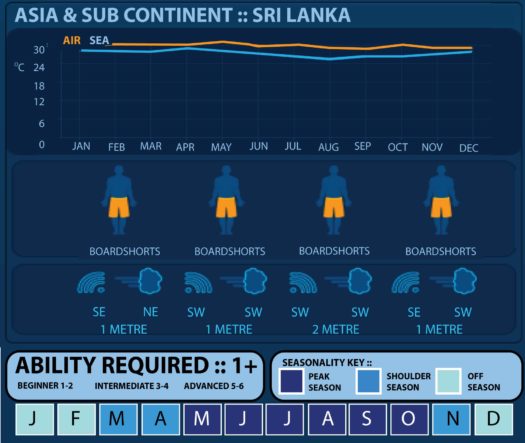 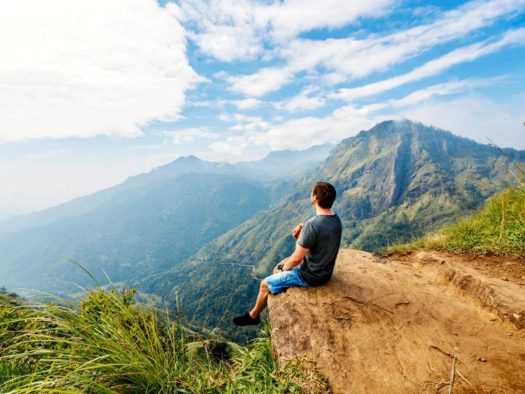 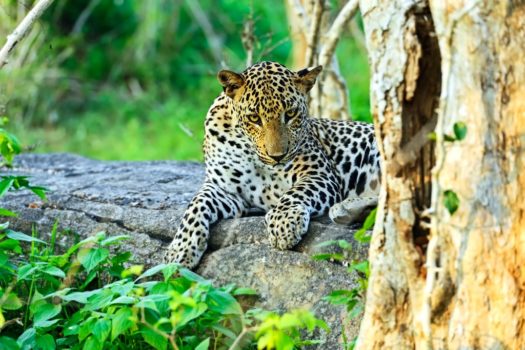 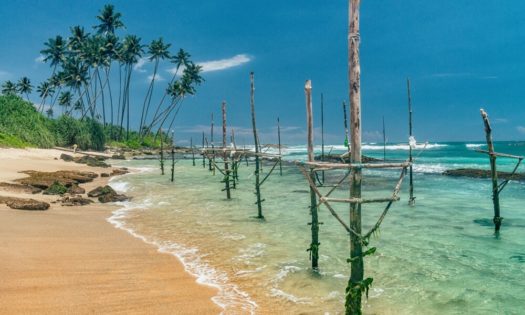 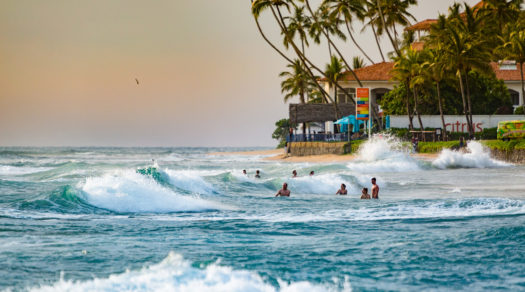 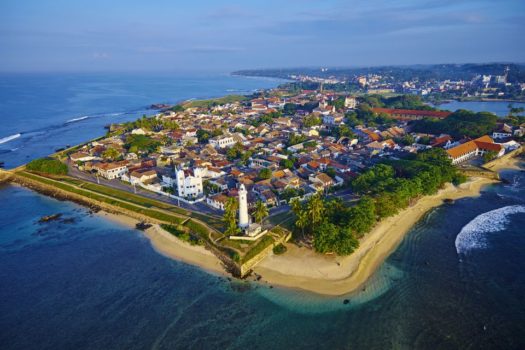 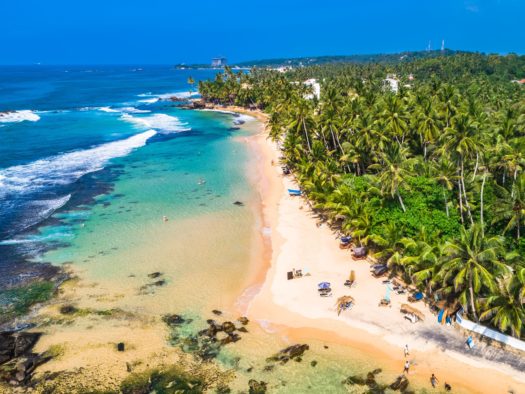 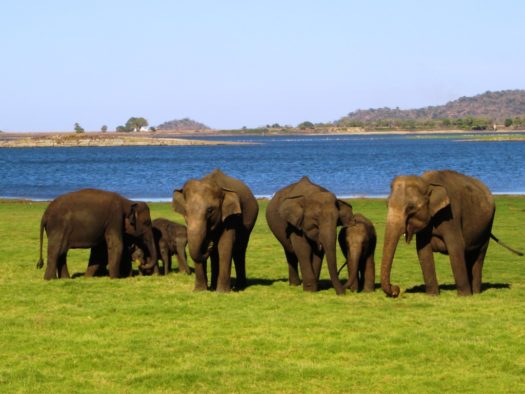 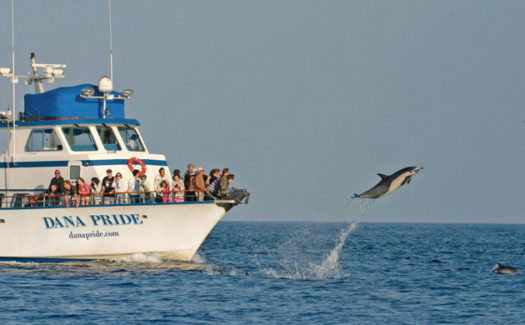 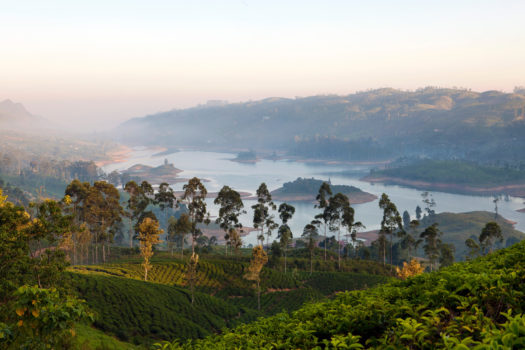 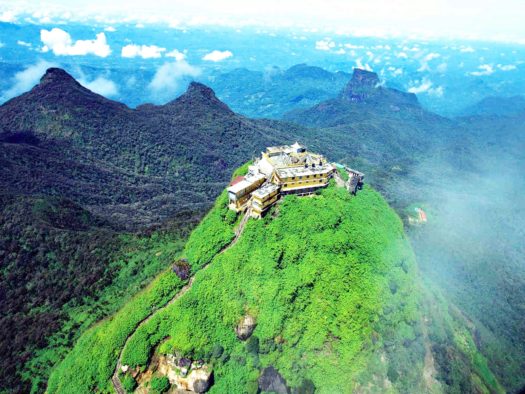 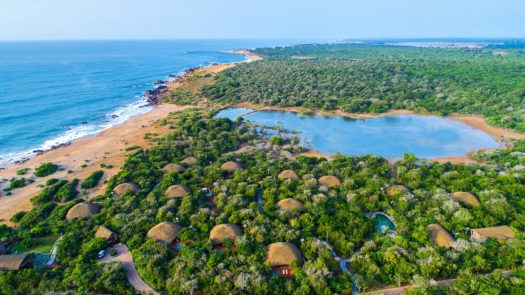 For those who can't tear themselves away from the sea, try whale and dolphin watching tours or laying beachside on any of the untouched beaches around the island. Inland, check out Yala National Park, home of the densest population of spotted leopards in the world. You can also spot elephants, tropical birds, lizards, and a variety of lovely flora and fauna. There are also plenty of trekking trails, including Adam's Peak at 2,243m above sea level. For a cultural treat tour the Ceylon tea plantations in the central highlands, or visit some of the nation's oldest cities, such as Colombo, Kataragama, Kandy, and Galle.

Sri Lanka, meaning “Resplendent Island” in Sanskrit, is nestled off the Southeast corner of India, just 5° North of the equator in the temperate Indian Ocean. As early as the days of the Silk Road, the island has been at the centre of the shipping and trading routes across the region, lending to a wonderful multicultural community encompassing several religions, ethnicities and languages. Today, Sinhala and Tamil are Sri Lanka’s two official languages, though English is widely spoken, especially in tourist areas. The nearly 1,600km of coastline boasts palm-fringed beaches, which have remained surprisingly undeveloped despite the rise in tourism to the island. The interior of the island offers a variety of landscapes ranging from wildlife-rich jungles, home to elephants, leopards and countless bird species, 51 natural waterfalls, Ceylon tea plantations and mountain peaks reaching over 7,000ft (2,100m). Despite its small size it has the highest biodiversity density in all of Asia. Average yearly temperatures range from 82°F (28°C) to 88°F (31°C).

Sri Lanka’s main airport is the Colombo-Bandaranayake International Airport (CMB). There are many non-stop options from Europe, Australia and Asia.

From its ‘no bills to sign’ all-inclusive packages, to personal butler service, and in-house spa treatments.

Underlying its success has come a mission to provide a unique and hassle-free experience.

Kottukal Beach House is a luxurious beach villa in the surfing hotspot, Pottuvil, on the Sri Lankan East Coast

Kottukal Beach House is a luxurious beach villa in the surfing hotspot, Pottuvil

Number One Mirissa
from USD $175

Set on half an acre of terraced grounds, the hotel’s stunning location provides panoramic views of the beach and bays beyond Mirissa

Set on half an acre of terraced grounds, the hotel’s stunning location provides panoramic

It lies on Arugam Bay on the South East coast of Sri Lanka, idyllically situated by the water.

It lies on Arugam Bay on the South East coast of Sri Lanka, idyllically situated by

Located in Hikkaduwa, Suite Lanka has a swimming pool and direct access to the warm water of the Indian Ocean.

Rooms are fully air-conditionned, cosy but spacious and are very reasonably priced.

The Fortress Resort & Spa is a luxury resort combining Dutch and Portuguese influences with touches of Sri Lanka.

Sri Lanka offers surfers of all levels a fantastic surfing experience and The Surfer is right next to Weligama beach.

No matter your surfing level you are sure to have the time of your life at The Surfer.

For family or a solo surfer, the Coral Sands Hikkaduwa offers you the best of all worlds with a vibrant, yet relaxing holiday in paradise.

Coral Sands offers you the best of all worlds with a vibrant, yet relaxing holiday.

Built and furnished in a colonial style, it boasts its own private beach and offers sweeping views over beautiful white sandy beaches.

This relaxed beach resort on the Indian Ocean is a 7-minute walk from Kumarakanda railway station.

Nestled next to the ocean, you will wake up every morning with beautiful views.

Imagine endless stretches of golden beaches with the rolling surf and stick-fishermen in the sunset.

Best known for the perfection of Cloud 9, the Philippines offers other great surf options and incredible room for exploration.

Best known for the perfection of Cloud 9, the Philippines offers great surf & exploration